Scotland's Bob MacIntyre claimed the Italian Open via a playoff over Matt Fitzpatrick after Rory McIlroy endured a tough day in Rome. 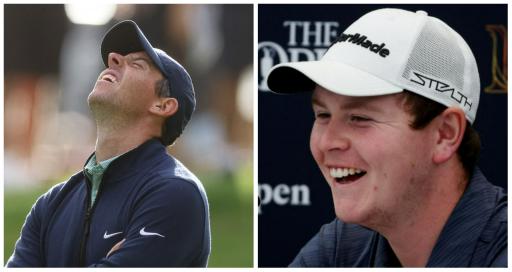 MacIntyre fired a final day 7-under 64 to finish alongside Fitzpatrick on 14-under par at Marco Simone Golf & Country Club in Rome, which will host the 2023 Ryder Cup.

More: What's in the Bag of Bob MacIntyre?

In the end, a simple birdie at the par-5 18th was enough for MacIntyre to get the job done as Fitzpatrick - who has been involved in some hilarious exchanges with his brother Alex this week - could only make par after a final round of 67.

McIlroy, 33, who sounded off once again at the start of the week about the LIV Golf Tour, endured a nightmare start to his final round when began with a catastrophic double bogey on the first hole.

Birdie on the first play-off hole @robert1lefty is a winner on Tour once again!#DS79OpendItalia pic.twitter.com/Zpn9CJ5DBR

The Northern Irishman recovered and made birdies at No. 5 and 9. He then made a charge by picking up more shots at 12, 13 and 15 to move within one of the lead.

But ultimately McIlroy came unstuck at the par-4 16th hole when he hit his tee shot, with a 3-wood, into the water hazard.

As ever, McIlroy produced a quality iron shot to leave himself a makeable par putt but his effort slid past the hole. MacIntyre then moved to 14-under.

Scotsman MacIntyre, 26, has had a somewhat indifferent 2021-2022 season. He began his season in Europe with two missed cuts before finding some form at Ras al Khaimah with a T-9 finish.

In the majors, he finished T-23 in his first ever Masters, 77th at the PGA Championship at Southern Hills and T-34 at the landmark 150th Open.

MacIntyre was said to have witnessed Sergio Garcia's outburst of anger at the BMW International Open in Germany earlier in the year when the DP World Tour confirmed they were suspending LIV Golf Tour players and fining them £100,000.

The Scot posted a message on social media to express his disappointment despite not naming Garcia.

He has previously dismissed the idea of LIV. When previously asked if he was to entertain the idea of joining the series, he told the media: "I'm just starting out my career. I'm playing on both sides of the planet, America, DP World.

"So for me right now, I'm comfortable. I've got a house, a home, my family is healthy. I've got a car I can drive."