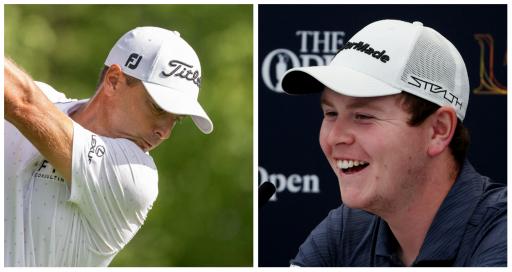 Howell, who has made more than 600 starts on the PGA Tour and earned more than $40million, will make his LIV Golf debut at Trump National this week.

The journeyman pro turned heads when he claimed "money was not a factor" when quizzed at a tense press conference in Bedminster, New Jersey this week alongside Paul Casey and Jason Kokrak.

McIntyre, who is said to have witnessed Sergio Garcia's outburst after being fined by the DP World Tour, decided to post this:

Not one, but two laughing emojis and three money bags. It's fair to say that McIntyre, 25, had a good chuckle to himself about that one.

Although the Scot later clarified:

What happened with Garcia?

When Garcia was fined £100,000 by the DP World Tour for joining LIV Golf and suspended from three events the Spaniard was said to have descended into an expletive-laden rant on the range at the BMW International in Germany.

MacIntyre was said to have witnessed this outburst in which Garcia allegedly shouted "should have taken the f***ing Saudi money".

"Amazing how fast you can lose respect for someone that you've looked up to all your life," the Scot wrote on social.

Though he later refused to comment further about what he meant, but we can read between the lines with that one.

Garcia has been in the news again recently after he announced his intentions to resign from the DP World Tour after "not enjoying" the 150th Open Championship at St Andrews.

The 2017 Masters winner claimed that he did not feel loved on the former European Tour circuit anymore.

He has reportedly changed his mind over the decision in an attempt to salvage his Ryder Cup Europe career after chatting with Jon Rahm.

Rahm expressed anger that Garcia and the other LIV Golf rebels were no longer eligible to play in the biennial event.

In other news, Luke Donald has reportedly been named as Henrik Stenson's replacement as Ryder Cup Europe captain after the Swede signed for LIV.

Next page: Paul Casey has questions for the DP World Tour