Ladies European Tour winner Christine Wolf hits the front at the Scandinavian Mixed to share the lead with Sam Horsfield on 8-under-par. 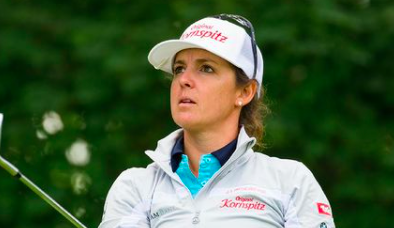 Christine Wolf shot a superb score of 8-under-par to lead the way alongside Englishman Sam Horsfield in the first round of the Scandinavian Mixed in Sweden.

Wolf, who competes on the Ladies European Tour, made two birdies in her first nine holes to play the first half of her round in 2-under-par, but the Austrian came alive on the back nine.

The 32-year-old made four birdies and a fantastic eagle on the par-5 16th hole which propelled her to 8-under-par for the day, and she would go on to card a 64.

Christine Wolf leads by one with a hole to play #ScandinavianMixed pic.twitter.com/QimRVEhMQQ

Wolf is a one-time winner on the Ladies European Tour and she now leads the first-ever mixed event on the European Tour in a historic week at the Vallda Golf and Country Club in Gothenburg.

Tournament co-host Henrik Stenson shot 2-under-par in his first round of the week on Thursday. The 11-time European Tour winner made four birdies and two bogeys and he sits six shots behind Wolf.

Annika Sorenstam, Stenson's co-host who retired from professional golf in 2008, returned to competition by shooting a respectable round of 1-over-par.

There are 78 male players and 78 female players competing at the event this week and they are all competing to move up the standings on their own respective tours.

NEXT PAGE: JUSTIN THOMAS AND JON RAHM CONFIRM THEIR PLACES AT NEXT MONTH'S SCOTTISH OPEN