Mike Dean was back on the bag of Ladies European Tour player Whitney Hillier, who he has caddied for on previous occasions. 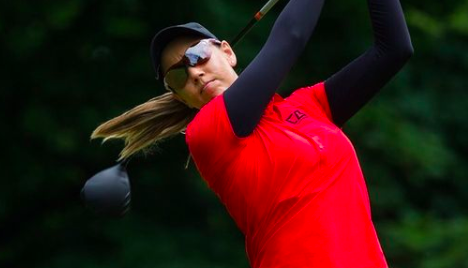 Premier League referee Mike Dean was back on the Ladies European Tour this week to caddie for Whitney Hillier at the Scandinavian Mixed in Sweden.

The controversial top-flight official has previously caddied for Hillier during her career and the pair experienced arguably their best moment in 2019 when the 30-year-old made a hole-in-one at the Estrella Damn Mediterranean Ladies Open.

The pair did not experience such success this week as the Australian unfortunately missed the cut on 1-over-par after two rounds.

Throughout his career, Dean has been involved in many controversial decisions in the Premier League and he has made himself a referee to remember with his outgoing personality.

It wasn't to be for Dean and Hillier this week but nonetheless, we are set for an exciting finish in the Scandinavian Mixed at Vallda Golf and Country Club in Gothenburg.

Caroline Hedwall, Alice Hewson, Jason Scrivener and Rhys Enoch share the lead on 12-under-par in a groundbreaking event on the European Tour and the Ladies European Tour.

Golf fans reacted to Dean's appearance on the golf course:

"He should have the line foam with him," one fan commented.

"It looked like he was ready to pull the red card out at any minute," another fan commented.

"I hope he’s better at carrying the bag than 'wielding the whistle'," another fan said.