The DP World Tour has announced record prize purses for 2023 in what will be perceived as a bid to try and counter their LIV Golf rival. 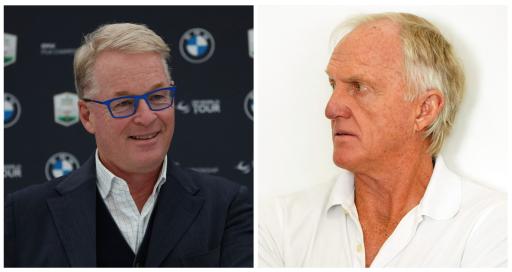 LIV Golf may have the most money in professional golf right now, but the DP World Tour has attempted to close the gap by announcing their 2023 schedule with record prize purses and the introduction of a player earnings assurance programme.

The circuit, known formerly as the European Tour, announced their 12-month 2023 schedule on Wednesday which will feature 39 tournaments in 26 countries and a record overall prize fund of $144.2m.

There was also a little dig at their LIV rival as the DP World Tour's chief executive Keith Pelley stated:

"Although we will never lose the magic of the meritocracy and purity of a performance-based structure, this now offers certainty of income to those players who have made it to the pinnacle of the professional game in Europe."

The LIV Golf League in 2023 will feature 14 tournaments with prize purses totalling $405m.

The DP World Tour announced a "strategic alliance" with the PGA Tour in 2020 and have claimed to have continuously strengthened it.

Most recently, one of those changes included giving the players who finish inside the top-10 on the Race to Dubai PGA Tour cards.

Some took a dim view of this change, like former World No.1 Lee Westwood who tees it up in LIV events.

The changes announced on 3 November will see DP World Tour members earning at least $150,000 if they compete in 15 or more events.

The aforementioned earnings assurance programme will also guarantee lower-ranked pros cash regardless of if they have played in 15 events.

"For us to be able to offer our members record prize funds and enhanced earning opportunities is massive, particularly when global economies are still feeling the effects of the pandemic and with the new challenge of rising inflation significantly putting pressure on costs in all facets of our business.

"Our overall prize fund for the 2023 season represents $50m more than 2021 and also underlines the strength of our partnership with the PGA Tour, who are working with us to drive revenue and a long-term growth plan.

"One of the many benefits we have been able to introduce because of this partnership is the new earnings assurance programme, similar to what they already have on the PGA Tour.
"I have always believed that it is an incredible accomplishment for any professional golfer to simply gain their playing rights on the DP World Tour and this new initiative recognises and rewards that achievement.

"Although we will never lose the magic of the meritocracy and purity of a performance-based structure, this now offers certainty of income to those players who have made it to the pinnacle of the professional game in Europe.

"Alongside the John Jacobs Bursary for the top five players who graduate to the DP World Tour from the Challenge Tour, it will provide security and a strong platform for emerging players in particular as they come through the global pathways we have created."

The DP World Tour has also increased the prize funds of the first four Rolex Series events where the prize purses will be $9m.

The season-ending DP World Tour Championship will have a $10m prize purse.

This year, Rory McIlroy is currently leading the Race to Dubai. He is also the reigning FedEx Cup champion on the PGA Tour and the new World No.1