This is everything you need to know about the 4 Aces GC, a team competing on the LIV Golf Tour which is captained by the American Dustin Johnson. 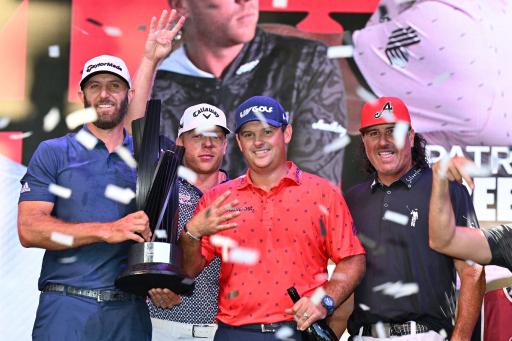 The 4 Aces GC is a LIV Golf team, captained by the American Dustin Johnson who famously resigned from the PGA Tour for a deal worth north of $100m.

If you're reading this article and you aren't sure what LIV Golf is all about, the series has been in the making for many years.

It was previously referred to as the "Saudi Golf League" before its official launch. It is separate from the Premier Golf League that was also touted.

LIV Golf was officially launched under the guise of LIV Golf Investments in October 2021.

It has been described as the golf equivalent for a breakaway European Super League in football because they have signed a number of major winners and members from the established PGA Tour.

LIV Golf is bankrolled by the sovereign wealth fund of the Saudi Arabia - the Public Investment Fund - which reportedly has assets worth $620billion.

It appears Norman and his LIV colleagues were given a blank cheque to start the series and sign some of the game's best talent.

The first announcement about the inaugural LIV Golf Invitational Series revealed $255m in prize money being given away over seven $25m events and one $50m Team Championship in Miami.

The fields were restricted to 48 players on a primarily invite-only basis competing individually. They were also split up in to 12 teams comprising of four golfers.

For winning a LIV Golf Invitational, the player receives a whopping cash prize of $4m. Whoever finishes has been guaranteed $120,000 in the no-cut, shotgun start format.

Each team was given a specific team name, a captain and branding. Unsurprisingly, the Tour's biggest names made given the honour of being team captain.

Phil Mickelson is one of those, and he captains the Hy Flyers.

Mickelson famously almost torpedoed the entire LIV Golf Tour before it even began, admitting that the Saudis behind LIV Golf were "scary motherf******", he was complicit in sportswashing and the majority of his dealings with LIV were really all about leveraging the PGA Tour into real change.

He later doubled down on those comments, although that change appeared to arrive.

The aforementioned Johnson, who was one of the first players to sign for LIV Golf alongside Mickelson, was announced as the team captain of the 4 Aces in the team draft before the first LIV event at Centurion Club just outside of London in June 2022.

It was there where the American circuit indefinitely banned members from teeing it up in LIV Golf events, which ultimately led to an antitrust lawsuit in the U.S. being brought against the PGA Tour.

Scroll down to find out more information about the 4 Aces GC...

The 4 Aces have previously had Oliver Bekker, Shaun Norris and Kevin Yuan in their team for the first event at Centurion Club before the American trio joined Johnson.

Johnson also picked up a further cash bonus of $18m for being LIV Golf's individual champion.

Before the season-ending Team Championship in Miami, Johnson picked up a staggering amount of money:

Johnson took his on-course earnings to $35,637,767 after the conclusion of the first year of LIV in Miami.