A new slow play rule will be in place starting at the Abu Dhabi HSBC Championship. 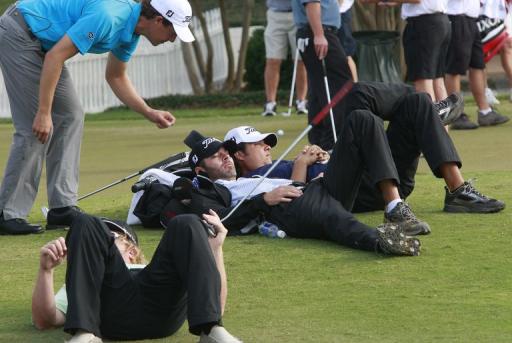 The European Tour will be clamping down on slow play after they announced a major change to their initial four-point plan. The new timing regulations will be put into play in the first event of the Tour's 'Desert Swing' at the Abu Dhabi HSBC Championship.

Players will now face a one-shot penalty if they are deemed to have taken too long twice during a tournament. It was originally announced that players would be penalised for two 'bad times' in a single round, meaning players could make up to four bad times in the tournament, as long as each was on a seperate day.

Tournament referees now have "additional powers" allowing them to target slow players and persistent offenders will also be fined if they are regularly "put on the clock" throughout the season.

"Changing the regulation for an immediate one-shot penalty to now be triggered by two bad times in a tournament instead of a round will force slower players to consistently ensure they play within timing regulations.

"This is part of our wider, robust policy to tackle slow play but our fundamental advice to all players remains consistent - they should be ready to play when it is their turn."

Slow play was one of the most topical subjects in golf throughout last season, with multiple incidents causing mass debate.

Bryson DeChambeau was at the forefront of the conversation last year, mainly due to an incident at The Northern Trust where a video emerged of the American taking over two minutes for a 10-foot putt.

Following the recent events in Iran, DeChambeau considered pulling out of this week's tournament in Abu Dhabi after he stated that "no American is safe," but it seems he will be playing in the Rolex Series event.

NEXT PAGE: Bryson DeChambeau once again left out of PGA Tour list