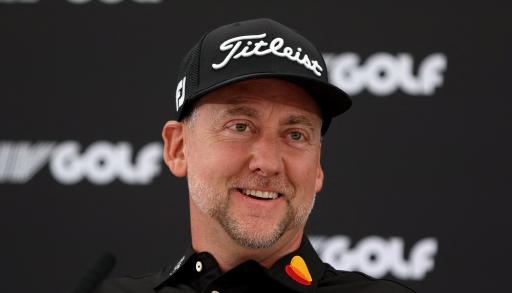 Ian Poulter, Justin Harding and Adrian Otaegui will now be allowed to compete in this week's Genesis Scottish Open after winning a legal challenge against the DP World Tour.

On June 24, the DP World Tour confirmed it would be banning its members that competed in LIV Golf events from playing in the Scottish Open, as well as the Barbasol Championship and the Barracuda Championship, which are all co-sanctioned with the PGA Tour.

All DP World Tour members that competed in any of the Saudi-funded LIV Golf tournaments thus far were also fined £100,000 after going against their rules.

But a hearing before HHJ Sycamore (an independent UK body) on Monday evening determined that Poulter, Harding and Otaegui are now allowed to play in this week's Scottish Open at The Renaissance Club.

DP World Tour chief executive Keith Pelley did not go into too much detail about the verdict, but he did say the DP World Tour was "disappointed by the outcome of today's hearing."

Pelley says that out of respect he will not be discussing the hearing about LIV Golf until the completion of the JP McManus Pro-Am at Adare Manor in Ireland on Tuesday afternoon.

The DP World Tour has released a statement for the time being, which reads as follows:

Following a hearing before HHJ Sycamore CBE, appointed by Sport Resolutions (UK), suspensions imposed on Ian Poulter, Adrian Otaegui and Justin Harding have been temporarily stayed, pending determination of their substantive appeals by an Appeal Panel in due course.

Keith Pelley, Chief Executive of the DP World Tour, said: "Out of respect for JP and Noreen McManus, their wonderful Pro-Am and the outstanding fundraising they undertake on behalf of charities in the west of Ireland, I will not be giving a detailed response on this matter right now.

"I will simply say we are disappointed by the outcome of today’s hearing, but will abide by the decision. It is important to remember, however, this is only a stay of the sanctions imposed, pending the hearing of the players’ appeal as to whether those sanctions were appropriate.

"The make-up of the field for the Genesis Scottish Open will be advised in due course, but based on this decision the field size will increase beyond 156.

"We will make further comment on this in due course, but not during our time at Adare Manor."

Poulter, who has played in both of the first two tournaments on the Saudi-backed LIV Golf Invitational Series, spoke to BBC Golf's Iain Carter earlier in the day where he made it clear he was going to do everything he could to tee it up in North Berwick this week.

"I will always continue to fight for my right to play golf," said Poulter, prior to winning his legal case.

'I will always continue to fight for my right to play golf.'

@IanJamesPoulter has confirmed to @iaincartergolf that he is fighting the DP World Tour decision to ban him from this week's Scottish Open.#BBCGolf

Next Page: Jordan Spieth disqualified during the first round of the JP McManus Pro-Am