Xander Schauffele takes a three-shot lead into the final round after a blistering 8-under 64 at Adare Manor. 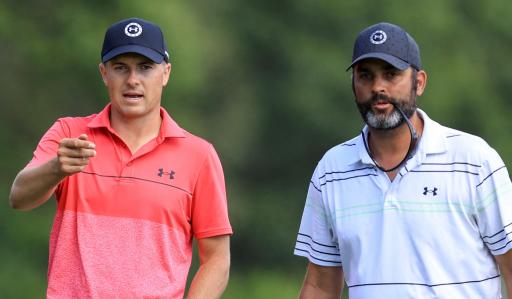 Jordan Spieth was disqualified during the first round of the JP McManus Pro-Am at Adare Manor in Ireland today.

Spieth was 3-over par thru 13 holes when the DQ happened on the 14th green.

According to reports, Spieth scooped his golf ball up on the green as his score was not going to count for his team, but then he soon remembered that he was still taking part in the individual tournament.

As Spieth picked his ball up and failed to finish the hole, he is now disqualified from the tournament.

He continued playing as part of his team, South Liberties, and they finished up on 11-under par in a tie for 28th.

The Gerry McManus team, featuring Rory McIlroy, led the way with an impressive 22-under par total on day one.

Related: Jordan Spieth accompanied by a goat while playing golf in Ireland

In the individual tournament, Xander Schauffele fired a scorching round of 8-under par 64 to lead by three shots over a resurgent Rickie Fowler.

Schauffele, ranked 11th in the world rankings, won in his last start on the PGA Tour at the Travelers Championship.

England's Tyrrell Hatton is a further shot back on 4-under par, with home favourites Shane Lowry and Seamus Power on 3-under par alongside Saudi golf rebel Brooks Koepka and South Africa's Brandon Stone.

McIlroy finished 1-under par in a tie for 12th, but World No.1 Scottie Scheffler was well off the pace with a 3-over 75.

It was also a day to forget for Tiger Woods though, who carded a disappointing 5-over 77.

Woods made a birdie on the 10th and a chip-in eagle on the 12th (watch above) but those were the only highlights in a round that contained six bogeys and a double-bogey on the 2nd.

Woods is making his first competitive start since withdrawing from the US PGA Championship in May.

He has confirmed he will be competing in the 150th Open Championship at St Andrews next week.

The final round of the JP McManus Pro-Am takes place on Tuesday afternoon and it is live on Sky Sports Golf.