World No.1 Scottie Scheffler hit one of the worst chip shots you'll likely ever see him hit at the JP McManus Pro-Am at Adare Manor. 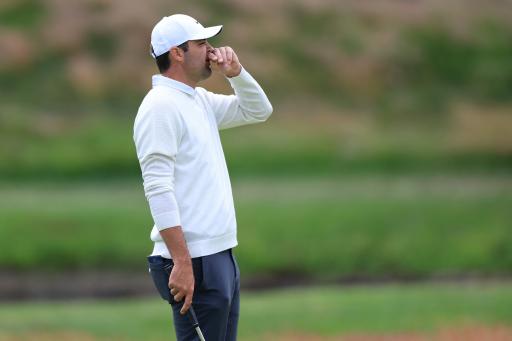 World No.1 Scottie Scheffler hit one of the worst chip shots you will likely ever see him hit at the JP McManus Pro-Am at Adare Manor.

Scheffler, 25, was 1-under par for his round through nine holes and found his golf ball settled to the right of the 10th green when he decided to try and play a flop shot.

Ordinarily, we would expect Scheffler to do something a little bit better than this. He opened up the blade of his TaylorMade wedge, took a swing and the ball cannoned dead right.

His golf ball went up and over the person holding the camera and appeared to bounce off the side of the green and settled back near the gallery watching him.

All that Scheffler could do was laugh. Even the Irish fans seemed to enjoy the hilarious moment as Scheffler walked approximately 10 paces over to his golf ball. He failed to get up and down and made a double bogey.

Jordan Spieth also played in the Pro-Am, alongside Tiger Woods, who shot 5-over par. The big cat, 46, looked in relatively okay shape but his short game was also a little rusty. He also used a buggy to get round.

Spieth was disqualified for picking up his own golf ball. Woops.

Scheffler is due to play the forthcoming Genesis Scottish Open at The Renaissance Club in an absolutely stacked field before heading to St. Andrews to play the landmark 150th Open.

The Scottish Open will feature 14 of the world’s top 15 players.

Rory McIlroy and Jon Rahm are slightly favoured by the bookmakers to win the last major of the season before heading into the business end of the season. Scheffler currently leads the FedEx Cup points race on the PGA Tour.

Scheffler has won four PGA Tour events this year, including the Masters. His last event on the PGA Tour was the Travelers Championship where he finished in 13th place.

He has earned more than $12million in winnings this season.