James Morrison came extremely close to shooting a 59 in the first round of the Omega European Masters on the European Tour. 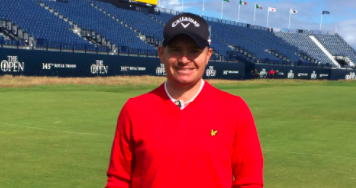 James Morrison had a chip on the 9th hole to shoot a 59 in the first round of the Omega European Masters, but he had to settle for a fantastic score of 60.

The Englishman shot 10-under-par in the first round at Crans-sur-Sierre Golf Club in Crans Montana, setting a new course record and a commanding lead at the top of the leaderboard.

Starting on the 10th hole, Morrison made three birdies and a fantastic eagle at the par-5 14th hole to go 5-under-par in his first six holes.

Incredibly, the 36-year-old made a bogey on the 18th hole but on the back nine, he recovered with six birdies to card a superb 60 and the new course record.

On the 9th and final hole of his round, Morrison had the opportunity to chip in for only the second-ever 59 on the European Tour, with Oliver Fisher's at the 2018 Portugal Masters being the only one. His shot went close, but not close enough so he settled for a still-amazing score.

Fellow Englishman Andy Sullivan also began on the 10th hole in Switzerland and shot a solid score of 6-under-par, currently sitting four shots behind the lead of Morrison.

NEXT PAGE: BEST NIKE GOLF FOOTWEAR DEALS FOR BOTH MEN AND WOMEN