Aphibarnrat has an absolute shocker on the par-5 18th as his hopes of making the cut are sunk at the Dutch Open. 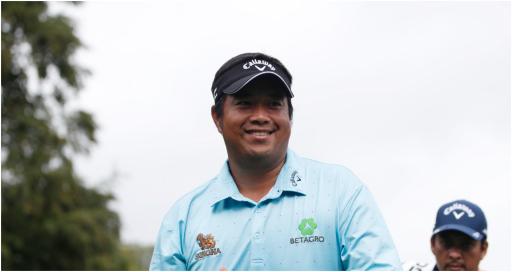 Kiradech Aphibarnrat stuck three balls into the water en route to a tournament-ending 12 on the par-5 18th in round two of the Dutch Open at Bernardus Golf Club.

Aphibarnrat, 32, was on the cut mark at 1-under par when he stood on the 18th tee but he would end up at 6-over par after making his worst career score on the DP World Tour.

The four-time DP World Tour winner drove into the water hazard and then took his drop before sending his third shot way right and out of bounds.

Aphibarnrat then sent his fifth shot into the water short of the green.

He strode up the fairway to the drop zone some 70 yards short of the green, and chunked his seventh shot once again into the ripples.

With balls running low in his bag, Aphibarnrat had another go from the drop zone and sent his ninth shot through the back of the green.

He then putted up from long range to around five feet and missed the putt.

Aphibarnrat then tapped in for a 12 and headed for the checkout desk.

Since winning the Thailand Masters at the end of 2021 on the Thailand Golf Tour, Aphibarnrat has struggled badly so far this year with five missed cuts in 11 starts.

As a result, he has slumped to 248th in the Official World Golf Rankings.