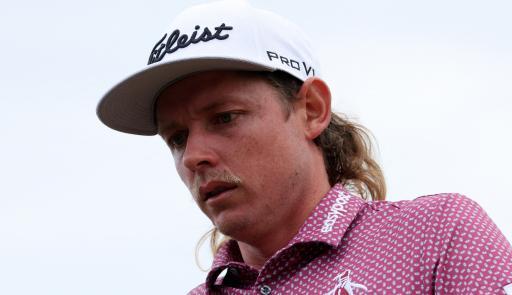 LIV Golf's Cameron Smith has not lost many times in 2022 but the red-hot Australian was defeated by his compatriot and semi-retired LPGA Tour legend Karrie Webb earlier this season.

The highlight of her career came in 2002 when she completed the Super Career Grand Slam at the Women's British Open.

Related: LIV Golf swoops in for PGA Tour venue, and it will host the first event of 2023

Webb, a World Golf Hall of Famer, is teeing it up in the Australian Open in Melbourne this week at both Victoria Golf Club and Kingston Heath Golf Club, a tournament that for the first time sees male and female golfers play on the same course at the same time for equal prize money.

The tournament will also feature an inspiring All Abilities Championship.

While the men and women will not compete in the same tournament or play in the same groups, the move is certainly a step in the right direction for the historic tournament that was first established for the men in 1904. The women's tournament was established in 1974.

But back to Webb, and she could not hide her delight at revealing she beat last week's Australian PGA champion and World No.3 in the men's game, Smith, a couple of weeks before he went on to win The Open Championship at St Andrews in July.

She also got a very expensive bottle of wine out of it, too.

"I was ahead when we got rained out so he paid up," Webb told Golf Australia with a beaming smile ahead of this week's Australian Open.
"He brought over a bottle of Grange - if he'd told me on the 1st tee that was what we were playing for I probably wouldn't have played so good.
"I had him sign the bottle and said I'm not going to drink this until one of us wins a big tournament and then two weeks later he did (at The Open) so now we've got to have a drink to celebrate."

Webb has won the Women's Australian Open a record five times, and despite now coming to the end of her golf career, she is not ruling out a historic sixth win in the tournament this week.

Very humbled to have my name along side so many greats of Australian Sport!! https://t.co/MlN1xU016d

"I'm trying not wear myself out as I'm not playing as much golf now so I'm cautious of not being exhausted when I tee off on Thursday," said Webb.
"I feel like I've played enough sand-belt golf over my career that if I get off to a half-decent start and get the juices flowing and feel good out there you never know what might happen.
"I don't put any expectation on it but I think if I get into a good rhythm I have a chance to win – I wouldn't play a tournament that I don't think I have a chance."

This is super funny! More of this content please! https://t.co/B0yDrfuSb6

Next Page: LIV Golf's Cameron Smith has not moved anywhere in the World Rankings despite his latest win