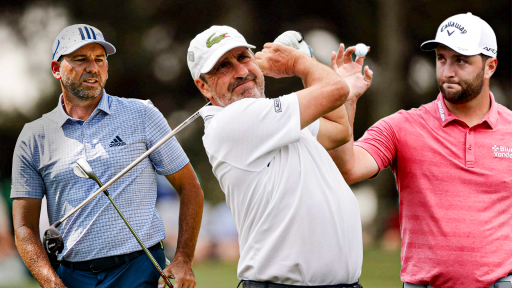 Speaking exclusively to GolfMagic in the stunning destination of Costa Navarino, Greece, Olazabal doesn't expect any type of cooperation between LIV Golf, the PGA Tour and the DP World Tour in reducing the hostility that now exists in professional golf.

As a former Ryder Cup captain and a seven-time participant, Olazabal shared fellow Spaniard Jon Rahm's view that the best players should be on both sides at Marco Simone in 2023, regardless of what Tour they've chosen, but admitted that LIV Golf players should find it hard to make the team.

Team Europe captain Luke Donald will have six picks for the event in 2023, three more than in 2021 and you could expect the Englishman to prioritise players who have remained loyal to the DP World Tour with his choices. Olazabal believes this should be the case.

The 56-year-old, who hosted the Jose Maria Olazabal and Friends Charity Pro-Am over 36 holes last week, referred to the formation of the original European Tour in 1972 and its process of globalisation which saw the first tournament held outside of Europe in 1982.

The angst against LIV Golf has mostly come from its association with Saudi Arabia, and although Olazabal shared Rahm's sentiment of the best versus the best, he is not fully onboard with LIV Golf players appearing at the Ryder Cup.

"Up to a point - the point is that I agree that you want the best players in your team, that's for sure. No questions asked about that. But we are in a situation where the LIV Tour is somehow challenging, not just the DP World Tour, but the PGA Tour.
"You take the decisions in your life and you have to cope with them. I think that in that regard, the LIV Tour is taking one path and for many, many years, we have managed through struggles and managed to have the PGA Tour and the DP World Tour.
"That is what it is and there is a lot of work behind that. That lifestyle or organisation, both of them have been challenged by the LIV Tour. It's competition, it is competing against each other and in that regard, we have to stick to the players that are supporting the DP World Tour.
"Many years ago when John Jacobs and a group of players decided to break with the British PGA who organised most of the events - they decided that we have more and more continental players playing here and I think we should look after them.
"They split and created (what was) the European Tour in those days. It is pretty much the same scenario. Take decisions and you have to live with them. If you are supporting a Tour, whatever that is, I think you have to take the best from that Tour."

Related Articles
DP World Tour pro birdies FIRST SIX HOLES to lead Ras Al Khaimah Championship
Pro goes after LIV Golf's "cheating" Patrick Reed in craziest rant yet!
"I would love to have the best players on the Ryder Cup team, but I think those players need to really show some support - not some support - high support to that Tour.
"That's why in the past, even though we were members of the DP World Tour (European Tour then), you had to play and fulfil certain things to play in the Ryder Cup.
"I don't know if they've crossed a line or not, but it's a decision that makes things a little bit more difficult for them to be part of the Ryder Cup team. Can it be reversed? Time will tell, we don't know how the whole scenario is going to end up."

The whole scenario will become clear in February when the verdict of a court case will be revealed. An injunction was put on the DP World Tour so that players couldn't be suspended until the verdict.

There are also three players remaining in the antitrust lawsuit filed against the PGA Tour. Bryson DeChambeau, Peter Uihlein and Matt Jones, as well as LIV Golf itself, now remain to wait for a trial not set to begin until January 2024.

Legal battles and court hearings are new spheres for professional golf, which may be the whole debacle's biggest shame. But Greg Norman and LIV are determined to cement their status as the best place for the best players in the world.

They have already convinced Dustin Johnson, Cameron Smith, Brooks Koepka and Bryson DeChambeau to make the controversial switch, but for how long could Norman remain in his role as commissioner?

It was reported by the Telegraph that former TaylorMade CEO Mark King could replace the Australian who would move into a different role.

At his press conference at the Hero World Challenge on Tuesday, Tiger Woods said Norman needs to leave his post so that LIV Golf and the PGA Tour "can talk freely."

Olazabal was not aware of this rumour, but no matter who is in the LIV hot seat, the two-time Masters champion doesn't believe any degree of relationship between the three main tours is on the horizon.

"I knew Greg when we played on Tour. We played together a lot of times and we competed against each other many times, but of late, I haven't had any contact with him for quite a bunch of years now.
"It's going to be very difficult to find common ground at the moment. Who makes the moves and what moves will be done to improve the situation? I don't know.
"It's a very difficult thing to achieve (cooperation) at the moment. What he said (Jon Rahm to Eugenio Lopez-Chacarra after his LIV Golf Bangkok win), he congratulated a kid who has won the LIV event - there is nothing wrong with doing that, it is a positive thing.
"But one thing is that and one thing is to find a common ground between the Tours and that is a huge step ahead and that will be difficult. You need to have a certain spirit to get a solution to it, but at the moment, I don't see that happening."

As for Rahm's exploits on the PGA Tour and the DP World Tour, Olazabal was extremely happy with not just the quality of Rahm's golf, but the way he conducts himself on and off the course.

Olazabal and Seve Ballesteros once held the baton for Spanish golf and they showed this with many iconic moments while earning 12 points in 15 Ryder Cup matches when paired together.

Last week on both The International Olympic Academy and The Hills Golf Courses at Navarino Hills, Olazabal's team beat Miguel Angel Jimenez's side in a light-hearted and fun two-day event which benefitted Children in Need.

His competitive fire still burns and it does in Rahm too. He won the DP World Tour Championship in Dubai two weeks ago and equalled Ballesteros' career total of three titles at the acciona Open de Espana in October.

He was remaining modest, but Olazabal believes the former US Open champion will have no trouble in surpassing his major tally.

"Winning is everything. That's what dictates how good a golfer you are. He is keeping the Spanish flag well up there. But it's not just that, it's the way he acts and behaves on the golf course.
"His interviews and how he talks with respect towards others. Winning is important, but that other part of the equation is as important as winning. In that regard, Jon has matured a lot in the last couple of years.
"He has all the possibilities - mine I don't think is going to last long (major tally of two). I think he's going to win more majors pretty soon. Beating Seve? Five is quite a task, but if anyone can do it at the moment, it's Jon.
"Considering this year, some people were saying he didn't have such a good year. He won three tournaments, he had an extremely solid year - he is very conscious. When you saw what he said after Dubai - 'everybody says I've had a bad season, I've won three tournaments'.
"He finished very well in the PGA Tour and the DP World Tour rankings. You miss a major? Sure. Winning majors is extremely difficult and there are only four in a year. He's still a young kid and on top of that, you have big changes in his life.

It was a great pleasure to host the first Olazábal & Friends Charity ProAm and play golf for supporting a good cause.
Looking forward to welcoming you all again in next year’s event.@sportmundi#CostaNavarino #CostaNavarinoGolf #GolfDestination#OlazábalandFriendsCharityProAm pic.twitter.com/pNkrPjfPfQ

"He is a great player. He respects the game and his peers and in that regard, my record is not going to last long. And Seve's one, you have to get six and it's not that easy."
Sergio Garcia, also a green-jacket holder, is one of a handful of stalwart European players to leave for the LIV Golf Series and he was also one of a handful to return to play at Wentworth in September.
He withdrew after one round of the BMW PGA Championship and was later pictured at a college football match in Texas, with no sign of injury or illness that could've explained his withdrawal.
It was quite appropriate that Olazabal complemented the behaviour and attitude of Rahm in 2022, which is in contrast to the actions of Garcia who, once again, made it hard for his fans to root for him with an unexplained withdrawal from an important DP World Tour event.
"This is my opinion is that he could've done things better, especially that week. I know it was a strange and difficult week because of the passing of The Queen and it complicated things for the event and for life in general," Olazabal said.
"But I think he could've done things a little bit better. It doesn't take much to say 'I'm not feeling well' or whatever (or) 'I decided to go back home'. At least give some sort of information to the tournament. It's our flagship event in Europe."