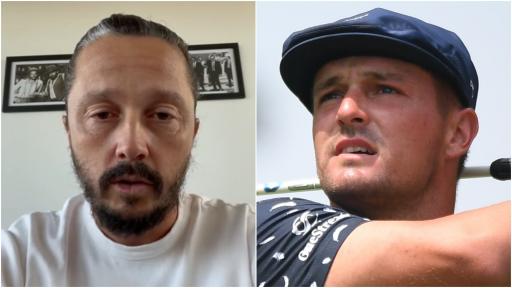 DP World Tour pro Mike Lorenzo-Vera has taken to social media to voice his concerns about a number of PGA Tour players picking up huge pay packets to join a new Saudi Golf League and he has asked them to all "come back to earth someday".

In the Frenchman's incredible 3-minute-plus video, Lorenzo-Vera, 37, admits he feels regret at having played in the Saudi International on previous occasions, especially after having seen a BBC documentary about a Saudi Arabian-led intervention in Yemen that has left kids dying with a lack of food.

Lorenzo-Vera was taking aim at his fellow DP World Tour and PGA Tour professionals who have either already committed or are at least contemplating joining an imminent new golf super league backed by Saudi billions.

Bryson DeChambeau and Phil Mickelson are reportedly two of the biggest names being linked with a move away from the PGA Tour to a Golf Super League, with an apparent $240 million deal up for grabs for DeChambeau should he want to take it.

Rumours have circulated this week that DeChambeau has already told fellow players that he will no longer be playing in any more PGA Tour events, but he has strongly denied such talk on his social media channels.

"Hello everybody, I'm doing this video because there is something that I don't really like what's going on now with the Saudi League and I would like to speak my voice on my social network," said Lorenzo-Vera.

"So I speak in English because hopefully this message goes a bit beyond the borders of France and I'm going to explain what has been going on through my mind the last week.

"I've been speaking with my agent about the Saudi League and it was kind of like 'well imagine man if I play better and I can access to that league then it's a huge amount of money that you can win'. It's like a lottery ticket for the family, and that's fantastic and stuff.

"Okay, then during the week after that, it's crazy, I was at the player's lounge in Ras al Khaimah during the tournament and the BBC was on TV and there was a documentary about what's going on in Yemen, and I've seen the kids, plenty of kids dying with a lack of food, and so skinny and so sad.

"I mean, this is just insane the situation there. I am no journalist, war journalist, I don't understand everything, but the thing that I could understand about that documentary is that the Saudis are involved, and well, it feels strange to look at this.

"Maybe I don't understand everything but as we say in France, there is no smoke without fire.

"I would like to speak to the guys that signed up for the league in that message. Maybe you could use that money, not all of it but a good amount of that money to give to charity for the kids in Yemen to bring some food to them? That could be pretty interesting, at least I would do it that is for sure.

"I know I'm not in the situation and it can sound maybe jealous or whatever, but I think sometimes we need to come back to earth a bit.

"I've seen the comments of Andrew Coltart and I think he is 100% right. Sometimes we lose the reality, and I've done the same sometimes, I've played twice in Saudi. The more the time passes and the more I feel uncomfortable with it, we just need to not forget where we come from sometimes.

"The European Tour, the PGA Tour has been here for us and we can thank them. I think to go away from them just for money it feels a bit strange, and THAT money feels even more strange.

"Well, tell me what you think. I hope you don't take that message as a lack of respect, it's just my point of view. I respect a lot of the players that you guys are, and I wish I had the same career, well, good luck to you guys and hopefully we all come back to earth someday."

What do you make about the plans and the money involved with a new Saudi Golf League? Will Bryson and Phil make the switch? Share your thoughts and comments over on GolfMagic's social media channels.