Bryson DeChambeau's eye-watering offer to drop his allegiances to the PGA Tour is north of the reported $135million, claims Peter Finch. 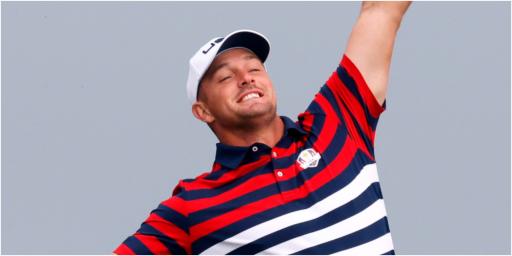 Bryson DeChambeau's offer to sign up to the Saudi-backed Super Golf League is actually $240million, according to Peter Finch.

The YouTube content creator quotes "sources on the ground" in the United States for the new sum that will make your head spin.

UPDATE: BRYSON DECHAMBEAU DENIES NO LAYING UP RUMOUR THAT HE'S NO LONGER GOING TO PLAY ANY MORE PGA TOUR EVENTS

DeChambeau had one word after reports emerged that he was offered $135million to be the poster boy for Greg Norman's concept: "Wrong".

The 28-year-old is currently taking some time off to get back to fitness after he injured his wrist and hip, forcing tournament withdrawals.

DeChambeau looked in visible agony at the Farmers. That was a week after he chose not to play the Sony Open.

He did attempt to play in Jeddah at the Saudi International, but withdrew after one round having shot 4-over par.

DeChambeau told people they need to "chill" and that his injury woes were not because of speed training.

One Asian Tour regular claimed DeChmabeau aggravated his injuries when he slipped on wet floor in his hotel playing ping pong.

Whether or not that is true only DeChambeau knows. He's shied away from commenting publicly about any alleged offers from the Saudis.

Although he did "wholeheartedly agree" with Charley Hoffman who launched an incredible attack on the PGA Tour.

That was after Hoffman got upset with a rule that he thought the USGA had changed at the 2022 WM Phoenix Open.

And, we do know that non-disclosure agreements have been signed in relation to what has been discussed.

Update on this, sources on the ground here in are saying the figure is closer to $240,000,000……yes you read that correctly https://t.co/paFV5GXGRF

Phil Mickelson has led the charge with his outspoken comments about the PGA Tour's business model.

Among Mickelson's gripes is down to the fact he and the other players do not have access to their own media rights.

Mickelson, 51, has said he will outline his stance further in due course.