Renato Paratore was in the thick of contention at the Omega European Masters, but even he saw the funny side of this incident. 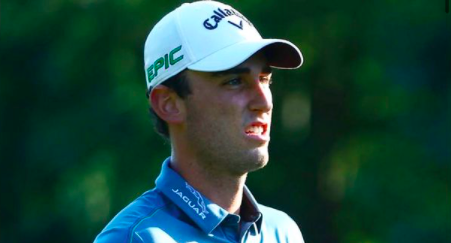 European Tour player Renato Paratore accidentally hit his ball into a spectator's bag during the third round of the Omega European Masters.

Paratore has emerged as a leading contender this week at Crans-sur-Sierre Golf Club after shooting scores of 65 and 66 on Thursday and Friday.

While the Italian was making his move and mounting his challenge in the third round, he hit a wayward shot into a crowd of people, where his ball finished in an extraordinary place.

His ball managed to land and fall into the rucksack of one of the spectators who had to stay still while Paratore and the rules official determined what should be done with his ball.

The World No. 214 and the rest of the crowd saw the funny side of things and it would appear that the rules official told Paratore to put a marker down on the ground in order to begin the process of getting his ball back in play.

It proved to be a good day for the 24-year-old on Saturday in Cranz Montana. He went on to shoot a solid 1-under-par 69 to share the 54-hole lead with American Sean Crocker on 10-under-par.

Something very similar to this incident occurred at the Northern Trust last week when Hideki Matsuyama hit a tee shot that ended up the back of a golf fan's shirt.

The ball went between his legs, bounced off his knee and into his shirt. The Masters champion was able to identify his ball and drop it safely without a penalty.