Patton Kizzire made a double-bogey at the 18th hole on Friday and unleashed all of his fury and anger on his putter and his hat. 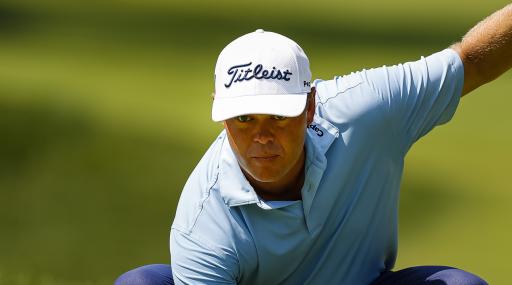 Patton Kizzire is on the brink of being eliminated from the FedEx Cup Playoffs. Having entered the week in 66th place in the standings, he needed a good week at the BMW Championship to qualify for East Lake.

But the 35-year-old could only manage a level-par 72 in the second round at Caves Valley Golf Club, which could have been better had he not made a double-bogey on the final hole.

WATCH: BRYSON DECHAMBEAU CALLS OUT PATRICK CANTLAY AT THE BMW CHAMPIONSHIP FOR WALKING!

After missing his bogey putt and tapping in for his score of 6, Kizzire took his putter and snapped it over his knee in what was one of the biggest meltdowns that we have seen on the PGA Tour.

When he walked off the course from the 18th green, his anger did not relent. The American took his hat off and began to rip it up in front of a number of on-looking spectators.

The two-time PGA Tour winner is currently in a tie for 46th place, which projects him at 69th place in the FedEx Cup standings. This is well short of the top 30 places that will progress to the Tour Championship.

Kizzire is a massive 13 shots behind the leader Bryson DeChambeau, who shot an incredible round of 60 to climb the leaderboard to 16-under-par.

Unfortunately, Kizzire has become accustomed to damaging his clubs. Last week at the Northern Trust, he broke his driver and was not allowed a replacement after it was deemed by an official that he had broken it through anger.

With so many low scores being shot in Maryland on Friday, this also may have been a source of Kizzire's anger. Patrick Cantlay shot a 63 and Sungjae Im shot 7-under-par in his second round, which shows that the course was not playing particularly difficult.

It is worth keeping your eye on Kizzire over the weekend. It is never good to see PGA Tour players lose their cool in this manner, but it can make for some great entertainment.