Rory McIlroy reveals how he hopes to play for another "15-18 years" and has no aspirations to play senior circuit golf. 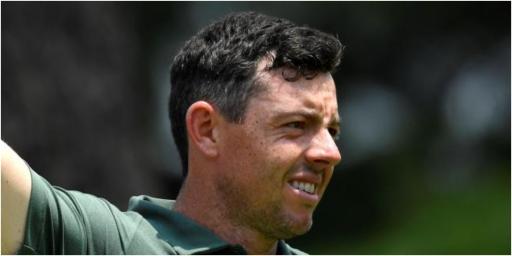 Rory McIlroy has said he is staying as patient as he possibly can as the wait for another major stretches into its eighth year.

McIlroy's most recent performance at the Abu Dhabi HSBC Championship followed a particular, familiar pattern for the Northern Irishman.

It's a trend that frustratingly for the now 32-year-old father of one has also trickled over into the majors.

Get off to a slow start. Battle your game. Grind away. Battle the elements. Make the cut. Make a run for it and then ultimately leave it all to late in the day.

As ever, McIlroy was recently asked about why the wait for another major has taken so long. Probably tedious for McIlroy to answer at this point.

But his answer to BBC Sport was a little different this time. It shows perhaps a different mindset for the player who perhaps has a different perspective on his golf this year.

"I think I haven't given myself enough chances," he ventured.

"I think if I'd have had more chances and realistic chances, just putting yourself in those positions, the more comfortable you are going to feel up there. And if you keep knocking on the door, one of those doors is going to open for you.

"I had a chance at Carnoustie in 2018, played the final group with Patrick Reed in 2018 at Augusta, tied for the lead with nine holes to go at the US Open last year at Torrey Pines.

"I've had a few chances and just haven't capitalised. I think players are getting better and better.

"A lot of these guys coming through are playing unbelievably good golf.

"I don't just have to beat five guys - there's 120, 140 guys very week that you're trying to beat and they're all phenomenally good golfers."

McIlroy's interview with the publication touched upon what he intends to do when he stops playing at the elite level. "I just don't think I'll want to play," he said.

"If I'm not playing top level golf and competing with the best players in the world I just don't think I will want to play.

"But when that day comes, hopefully not for a long time - another 15 or 18 years - I don't want to be sitting in my house thinking 'OK what do I do?'"

McIlroy's "thirst for knowledge" will also see him taking on more ventures in the business world.

McIlroy already has an extensive portfolio and is part of an investment partnership. He wants to get his feet wet with other hi-tech businesses and wellness, he said.

TaylorMade staffer McIlroy enjoyed the charge last week on the DP World Tour and found some positives heading into this week for the Dubai Desert Classic, a tournament that he has won twice.

The only major he is yet to win is the Masters. Golf fans remember his collapse at Augusta National when he was a bushy-haired and didn't have the same muscle mass he carries now.

More: Rory McIlroy says he turned a corner after the Ryder Cup

He told the BBC:

"I haven't won a major in the last seven years but I've basically won everything else.

"That hasn't included a major championship but I've played good enough golf in those seven years to win one and I'm staying as patient as I possibly can and, as I say, just giving myself chances.

"I don't think there's anything I should or could do differently. I think the one thing that's held me back, especially in the majors over the last few years, is just getting off to slow starts."

Next page: What's in Rory McIlroy's TaylorMade golf bag in 2022?