Rory McIlroy: "I turned a corner after the Ryder Cup"

Rory McIlroy says he is feeling good as he goes in search of his first victory in Abu Dhabi, and he believes he could be in for a very good season on Tour. 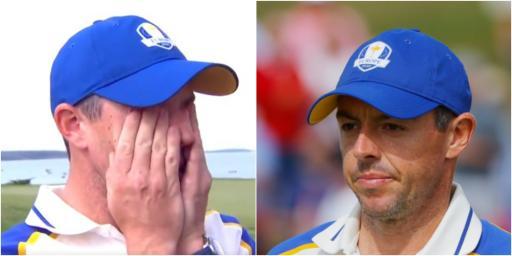 Rory McIlroy admits he "turned a corner" after his lacklustre appearance at the Ryder Cup in September, a loss to the United States that reduced him to tears at Whistling Straits.

But after bouncing back manfully with victory at The CJ Cup in October and finishing the year strong when going close at the DP World Tour Championship, the four-time major champion is ready to roll in 2022.

And it all starts for McIlroy this week on the newly-named DP World Tour (formerly the European Tour) as he goes in search of his first victory in Abu Dhabi having come very close to glory on multiple occasions.

McIlroy is feeling good and believes he could be in for one of his best ever seasons on the DP World Tour and PGA Tour.

"I think there's always excitement and anticipation about a new year coming around and wanting to get off to a good start."

"I've been playing well in practise. I've been practising well. I've done some good work over the really sort off-season that we had. But yeah, it feels good. It's nice to come out here and have these run of events be the first events of the year. It's perfect weather.

"It might be a little windy for the week but you can get some good practise in and you still want to do really well in the tournament but it's a bit like, you know, just to see where your game is and see what you need to work on going into obviously the meat of the season in a couple months' time.

"I definitely feel like I turned a corner after The Ryder Cup. I think anyone that was paying attention saw I played better those few events after The Ryder Cup and it's just trying to continue on what I've been working on since then.

"I think trying to eliminate the big miss off the tee, those destructive shots where you make doubles from, reign that in a little bit and getting more effective with the scoring clubs. If I do drive the ball well I give myself so many opportunities. It's about hitting new shots that maybe go to 15 or 20 feet or inside ten feet and all of a sudden you start to hole some and get a bit of confidence there.

"There's not much I need to work on but there's a couple of key aspects, and I think if I can get them down early in the year, I could be in for a good season."