Viktor Hovland has broken into the top five players in the world and he used his excitement to take shots at Ian Poulter on social media. 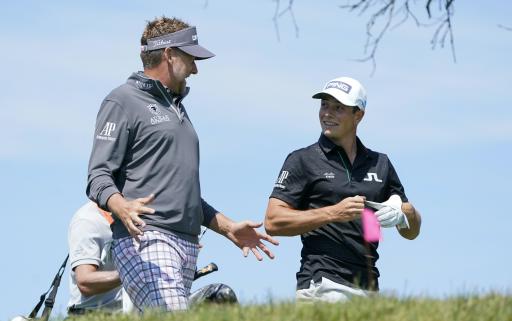 After he finished tied fourth at the Abu Dhabi HSBC Championship, the young Norwegian moved up to a career-high mark of fifth in the world rankings.

Despite his runner-up finish at the Farmers Insurance Open this time last year, Hovland is staying in the Middle East for the Slync.io Dubai Desert Classic.

The 24-year-old has grown in popularity for his youthful and exuberant personality, but sometimes, his jokes and banter with his fellow DP World Tour professionals can be brutal.

Ian Poulter was on the receiving end of one of Hovland's jibes on social media. Poulter posted a picture of the 8th hole at Emirates Golf Club on his Instagram story.

The Englishman was commenting on how the skyline in Dubai had changed down the years, but Hovland ignored this and fired a shot at his 2021 Ryder Cup teammate.

"You playing the up tees?" Hovland said in a message to his friend. Poulter was sarcastically appreciative of the alleged 'support' that he'd just received.

What might add to the exchange is the fact that Poulter, a three-time winner on the PGA Tour, finished one shot behind Hovland at Yas Links last week.

Hovland is certainly full of confidence at the moment and there is also an element of bragging rights involved. However, once both players tee it up on Thursday, they'll be fully focused on winning their first Rolex Series title.

Hovland earned his first victory on the DP World Tour at the BMW International Open in 2021, whereas Poulter has not won on this tour since the WGC-HSBC Champions in 2012.

NEXT PAGE: BRYSON DECHAMBEAU ON TIGER WOODS: HE WAS NEVER ABLE TO LIVE NORMAL LIFE