The Spaniard shot a 6-under par opening round at the Dubai Desert Classic and sits two behind leader Richard Sterne. 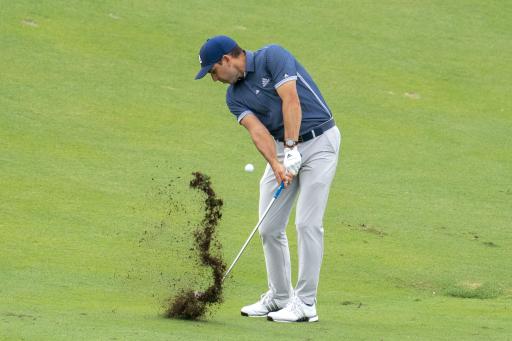 Sergio Garcia got off to a flying start at the Dubai Desert Classic, firing a 6-under par opening round as he looks to cement a place in Padraig Harrington's Ryder Cup team in September.

A bogey-free round of 66 leaves Garcia just two shots behind leader Richard Sterne heading into Friday's second round and the Spaniard put on a sensational iron display throughout the opening round.

WATCH GARCIA STICK AN 8-IRON SHOT CLOSE IN THE VIDEO BELOW:

"I felt comfortable out there for sure," said Garcia, who turned 41 earlier this month. "Conditions obviously were good, but they were tricky. The greens are a little patchy when it comes down to firmness. Some spots are really firm and some spots you can definitely spin it. So it's just a matter of getting the right hops there.

"But other than that, I felt like it was a good, solid day, and I'm very happy with the way it went. It's a big year, and hopefully I can be in good shape because I want to be a part of a lot of things this year."

Another player looking to make it to Whistling Straits is tour veteran Paul Casey who marked his return to the Dubai Desert Classic after a seven year absence with a 5-under par round of 67.

"Still a great day," said Casey. "This is a difficult golf course. The last time I played here was seven years ago and it was difficult then. It's grown some teeth in the last few years, with some new tees. Yeah, very happy with that start."

American Kurt Kitayama holds second place on his own, just one behind South African Sterne, while Justin Harding shares third place with Garcia.

Tommy Fleetwood shot a 4-under par opening round to sit in a tie for 9th, while fellow Englishman Tyrrell Hatton - who won last week's European Tour event - struggled with a 4-over par round and has his work cut out if he is to make the cut into the weekend.