Richard Finch then responds to Tiger Woods on Twitter. 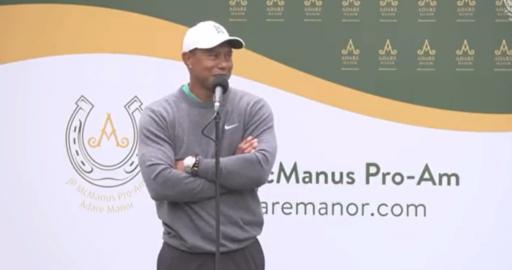 Sometimes when you are as big as Tiger Woods, it's hard to remember some of the lesser names that have been out on Tour.

Woods, who competed in the JP McManus Pro-Am at Adare Manor on Monday and Tuesday this week, was quizzed by one journalist as to what he considered the marquee hole at the cherished Irish track.

"I'd have to say the 18th as I think it's pretty funny that, erm, what is it, Robert Finch, is that his name?" said a slightly confused Woods, who needed a bit of help from the room for the correct first name.

"Richard? Richard Finch? He fell in the water. I think that's pretty iconic."

Woods went on to finish tied 39th after rounds of 77 and 74 in his last competitive warm up ahead of The Open at St Andrews next week.

My mate Trevor…. His memory isn’t what it was but he’s still a legend. From Bob pic.twitter.com/cbx7N2mGa3

"My mate Trevor…. His memory isn’t what it was but he’s still a legend. From Bob," tweeted Finch.

For those who have never seen the clip of Finch falling into the water on the final hole of the 2008 Irish Open at Adare Manor, or for those that just want to re-live the magic moment again, you can watch the video below.

Finch's ball came to rest on the bank of the river and as he played the shot, instantly lost his balance and fell back into the water. He went on to record a bogey-six but thankfully held on for victory and a first prize of £330,297.

Fall in the water, win the golf tournament

The now 47-year-old only won twice on the European Tour with victories at the 2007 New Zealand Open and 2008 Irish Open.