Viktor Hovland hasn't enjoyed his best golf in recent months and this showed on the 4th hole at The Renaissance Club when he hit a shot like that of a club golfer. 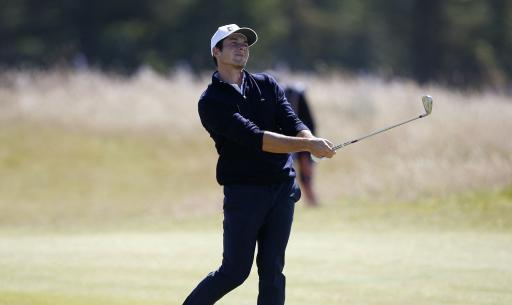 Professional golfers on the PGA Tour and the DP World Tour aren't immune to the odd mistake and Viktor Hovland proved he was human during the first round of the Genesis Scottish Open.

Hovland reached the middle of the 4th fairway, his 13th hole of the day, looking to claw back some ground from a difficult start, but he did the complete opposite.

The young Norwegian hit a full-on shank which burst out at a right angle. His ball finished in deep rough and next to a small tree. He watched his ball fly off in disbelief.

Unfortunately, things went from bad to worse. He could only move his third shot about a foot forwards and he eventually found the green with his fourth shot.

The 24-year-old was staring down the barrel and he went on to make a double-bogey. He fell back to 3-over for his round and he eventually carded a 4-over-par 74.

His first round at The Renaissance Club was indicative of his season on the PGA Tour. He has only made four top-10s in 16 events and his last one came at The Players Championship in March.

He may have won his third PGA Tour title earlier this season at the World Wide Technology Championship at Mayakoba, but he hasn't been his superb self since.

His disappointing round in East Lothian could be forgiven, however. On Wednesday night, his clubs and clothes still hadn't arrived at his accommodation having flown via Frankfurt in Germany.

Hovland is no stranger to some travel chaos on the PGA Tour. Back in January, his clubs didn't arrive to him until the day before the first round of the Sentry Tournament of Champions and when they did, his driver was snapped in half.