We test out PING's new drivers and irons for 2018 - how much diferrence will we see between the products? 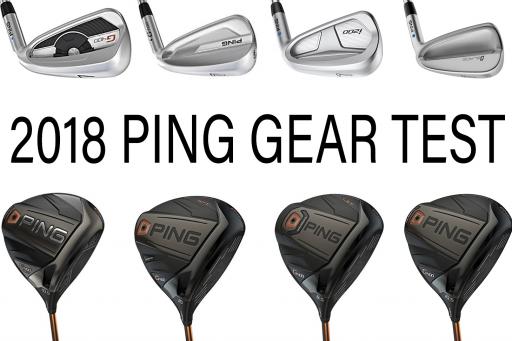 Just how different are the variety of products in a brand’s line-up? How does distance differ with a game improvement club, how does flight alter with a draw-biased driver, how does consistency change with a better players’ iron?

We set out to answer these questions and more, so we met up with a PING fitter at Hadley Wood Golf Club in order to find some answers.

We used the same shaft in every driver -  PING Tour 65 stiff 61 grams - and did the same with the irons - Project X LZ 6.0, 0.5 inches longer and two degrees upright. Regarding driver lofts, we used the loft sleeve to put the settings into 9.4/9.5 degrees.

We used Trackman data, on a normaliser setting to offset the wind and cold conditions (it.was.freezing). We used Srixon AD-333 golf balls.

We randomised the club heads we used, hitting no more than four shots per club after a short warm up (we needed it). Club head speeds across the driver and iron testing was fairly consistent.

RESULTS: The most consistent driver for us, with the longest average distance. Our distances were most consistent with the G400, as was our flight, pictured above. The dispersion was very similar to that of the G400 Max.

VERDICT: The driver we would bag from the PING range. Consistent yardages and flight, with good dispersion. A superb all round mix of performance.

VERDICT: Great performance regarding distance, but we didn't get the increased forgiveness we expected.

RESULTS: PING say this club can offer 300 rpm less in spin compared to the standard G400 product. The test showed we got around 200-300 rpm less, and had a lower launch angle. We also got the highest ball speeds out of this club, and we hit our longest driver with it.
However, on the miss hit shots we lost the most distance, and also had a tendency to leave some shots out to the right.

VERDICT: The longest club in the test, but the one that punished us the most on miss hits.

RESULTS: Really worked our ball right to left. As a natural drawer of the ball, this is not a club we would usually opt for, but you can see that for a player who hits a slice, it is a great option to straighten them out.  We got marginally higher levels of spin with the SFT.

VERDICT: Does just what it is meant to. As we naturally hit right to left, we got big draws with the SFT, but it could be a great option for a fader.

The drivers performed as PING said they would, perhaps with the exception of the G400 Max. The G400 was the most consistent, the LST spun the lowest by 200-300 rpm, and the SFT gave us a hard draw. We did not get any more forgiveness from the G400 Max, although we would need further testing from other golfers with varying swings to conclude this is not any more forgiving than the G400, despite not being more forgiving for my swing.

RESULTS: Joint highest balls speeds with G700. Middle of the pack for spin rates and launch. Had a tendency to tug a couple left with the G400.

VERDICT: Like the G400 driver, the G400 iron offered all round performance. However, we didn’t find it the most consistent iron in the test in terms of dispersion and distance. Good distance, but does have a stronger loft.

RESULTS: Joint top ball speeds, and on average the longest club in the test - it does have the strongest loft, however. Lowest spin and launch. We found it difficult to control and sprayed it a bit because of the thick sole, which impacted our consistency of strike.

VERDICT: Great distance, but the thick sole didn’t work for us and we struggled with strike, which meant we had poor dispersion.

RESULTS: Slower ball speeds and lower launch compared to G400 and G700, and while it was just shorter than the iBlade (remember, higher lofts…) we got the best consistency from this iron. Flight, dispersion, and yardages were superb. We had the highest spin with the i200, which will help with control coming into greens. The performance was largely down to a thinner sole, which helped us get a crisp strike for consistent performance.

VERDICT: The shortest iron in the test, but for us this is the product we would bag! Consistency and dispersion was excellent, and we had full trust that we would be on the number with a decent swing.

RESULTS: Very similar performance to the i200 irons with slightly less spin. However, our dispersion suffered with the iBlade, and we didn’t get the consistency we required.

VERDICT: hard to split from the i200 iron, but designed for great ball strikers, who probably would have seen an increase in playability.

Nails home the importance of getting fit. The thinner soles of the i200 and iBlade gave us a better strike, and the i200 gave us the most consistent yardages and best dispersion. Even though this was the shortest iron in the test, a fitting would allow us to built our bag around the consistent yardages.

The G400 was also very impressive, but we lost a bit of consistency, and while the G700 packed some serious heat, the thick sole caused us issues.