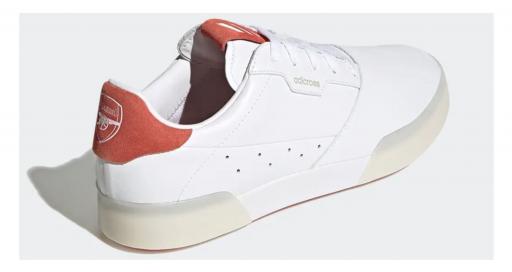 As the football season concludes, fans everywhere will be taking their support and bragging rights from the front room to the fairways. For Arsenal fans, adidas is making sure those that cheer on the Gunners will have something special to show their stripes as they take to the golf course this post season: the adicross Retro Arsenal Edition. Available today in both Europe and Japan, the limited-edition footwear will be one to remember.

A combination of performance and lifestyle, the adicross Retro is a cue to classic adidas styling that transitions from the course to the streets. Featuring the famous Arsenal Football Club crest, the special red and white colourway pays homage to the fans with ‘One Nil’ printed on the sockliners, the lyrics from the famous terrace chant that be heard across North London and in many homes around the world on matchdays.

“After adidas recently partnered with Arsenal and celebrated some of the iconic jerseys, we wanted to take that passion and history and incorporate it into one of our golf shoes,” said Masun Denison, global director of footwear, adidas Golf. “We hope this gives the fans a chance to represent their love for Arsenal whether they’re on the fairways, or on the streets of North London.”

The adicross Retro features a durable spikeless outsole for wear-anywhere versatility, alongside a waterproof leather upper for those rainy matchdays.

The adicross Retro Arsenal Edition is available today in limited quantities in the UK (£84.95) and Japan (August 14), via www.adidas.com, the adidas app and select Arsenal retail stores.