DeChambeau ready to take things further with his driver by considering a 48-inch driver on the PGA Tour. 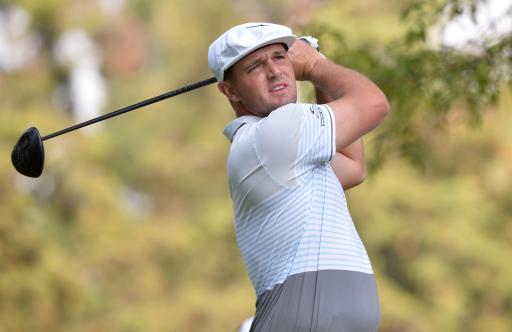 Bryson DeChambeau has revealed he is currently considering putting a 48-inch driver in the bag when he (hopefully) returns to action on the PGA Tour this summer.

Following an off-season of bulking up in the gym, DeChambeau has surged up the driving distance charts this year to become statistically on average the PGA Tour's longest hitter of the season at 321.3 yards. That is currently one yard on average further than Rory McIlroy.

The World No.13 recently claimed he is currently reaching up to 203mph of ball speed.

DeChambeau now believes he can continue to push boundaries in terms of his driving by potentially moving into a 48-inch driver shaft.

He currently uses a Cobra KING F9 Speedzone driver (9-degrees... although he was testing a driver as low as 4.8-degrees in the off-season) that is 45.5 inches in length.

"I’d definitely use a 48-inch driver if I could control it," said DeChambeau during his latest Twitch video.

"I’d generate so much more speed, but it’d need to be light enough, though. We’re going to mess with that.

The USGA currently prohibits shaft length from exceeding 48 inches, so DeChambeau's proposal would be legal should he wish to go down that route.

DeChambeau currently uses the same length shafts in all of his irons, and they are all the equivalent length of a 7-iron.