Did anyone notice the unusual irons Dufner had in the bag at The Players?

Jason Dufner made a switch in irons on the weekend at TPC Sawgrass. 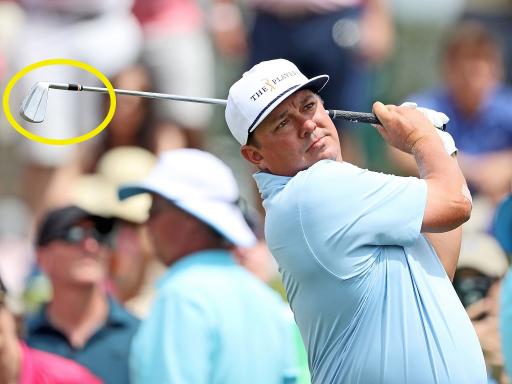 Jason Dufner loves to do things a little different. You only need take a look at his array of caps each week to realise that on the PGA Tour in 2018.

But he also switched things up with his irons at the weekend of last week's Players Championship, where he three-jabbed the final hole when missing a tiddler for par and a tie for second.

Dufner, who used to play with Titleist 716 AP2 irons, replaced his irons on the Friday with a set of National Custom Works blades en route to shooting weekend rounds of 66 and 68.

RELATED: DUFNER FIRES BACK AT CRITICS OVER SHOCKING MISS

According to an interview with GolfWRX, Dufner - who has also recently swapped his Titleist 917D2 for a PING G400 driver - had been testing his new National Custom Works irons a number of weeks after reaching out to the company's founder Patrick Boyd.

Incredibly, Dufner loves them so much he has chosen to pay for them out his own pocket, just like the rest of us average hacks...

"Jason [Dufner] is a client like any of my other clients: he pays for his golf clubs," said Boyd. "We don’t have a contract with him. He’s all about playing the best equipment that works for him.

"He’s been trying a lot of different stuff. He doesn’t have a contract right now. So, I asked him during that process what was happening and what he was seeing, and it became apparent that the soles on the irons he was playing were digging in too much. His spin rates were a little bit high, which to me indicates he was hitting it higher on the face than he’d like to.

"That was the beginning of the conversation. He was really, really thorough. He knew all his numbers and he knew exactly what he was talking about.

"Initially, we met down at Albany. I had him bring what he was playing and what had been successful for him. Me and Don had a look at what was going on. It became clear pretty quickly what we needed to do as far as the sole configuration. That’s what he was fighting: the bottom of his golf clubs weren’t matching up with his angle of attack.

"That was the first step. We made a couple of samples for him to take home…I got about two hours down the road and my phone rang. It was Dufner saying, “I hit balls with them. Everything is great. Just make this one little change,” and I got everything in to Don.

"The first set we made for him, this is kind of interesting, when he told us about the trajectory he wanted and what he had in mind, Don looked at him and said, ‘Man, you want some blades!’ And he hadn’t played blades since he was in college. But the first project we worked on with our client were cavity backs.

He worked with them on Trackman and his numbers were really good, but the thing that was interesting to me was we used the smaller cavity back we work with and he thought it was a little too long heel-to-toe for him, so he asked me to make him a set of blades. So, we talked about that project…and once we had the sole knocked out and knew what he needed there, as well as what his preferred toe shape is, his preferred aesthetics, the offset he likes, it was pretty easy to put a set together for him."