Check out the brand new Srixon ZX5 and ZX7 drivers and irons, along with new ZX fairway woods and hybrids... 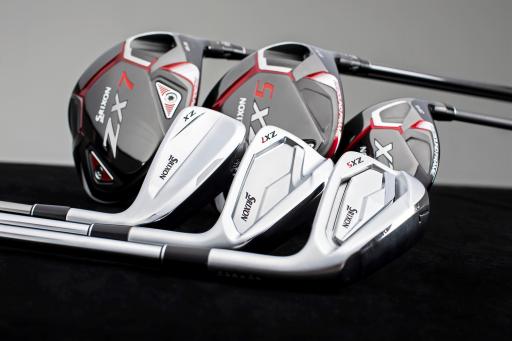 Srixon is launching brand new ZX5 and ZX7 drivers and irons, as well as new ZX fairway woods and hybrids, and they will be available at retail from September 19.

Before we head out to the course to test these new woods and irons out, we want to give you a first look at what they're all about... and they obsess over one thing and that is speed. Let's start by taking a closer look at the new ZX woods...

Srixon's new ZX woods help generate more speed and distance thanks to Srixon’s new Rebound Frame Technology, which works by layering alternating zones of flexibility and stiffness that work in tandem to focus more energy into the ball at impact. The result is increased ball speed and distance off every tee.

"From the center of the face to the very rear of the club, we’ve tuned the clubhead stiffness to put more energy into the ball than ever before. The entire driver head works in harmony to provide an unprecedented rebound effect, giving you more maximum ball speed for more distance."

With assistance from our tour staff, Srixon’s ZX drivers bring speed and power to the forefront.

Both drivers feature a strong but lightweight carbon crown that is 15% larger the previous generations. This new crown repositions mass low, deep, and around the perimeter, increasing MOI and forgiveness on every drive.

The ZX7 driver delivers total control due to a penetrating ball flight and adjustability features to give any player their desired launch conditions.

Meanwhile, the ZX5 driver delivers total confidence due to a larger footprint and flattened shape, with a single weight placed low and deep to help make ZX5 drivers ideal for straight drives that launch high and carry far.

The same powerful technologies, tour preferred shaping, and focus on speed are featured in the new line of ZX fairway woods and ZX hybrids to deliver outstanding distance performance.

Srixon remains at the forefront of iron design and performance, and the new ZX irons represent the perfect combination of beauty and power.

"While the new ZX irons are gorgeous to look down at, it’s the technology inside that’s even more exciting," said Brunski.

Created with human intelligence yet perfected by the artificial kind, MainFrame is a one-of-a-kind face design that increases ball speed on every shot.

Milled into the backside of every iron face, MainFrame is a variable thickness pattern made up of grooves, channels, and cavities.

After two years of learning and refining, these final faces offer greatly improved COR because they maximize flex at impact for more ball speed on every strike.

Srixon’s ZX5 irons combine pioneering ball speed technology with premium forged feel, and delivers all of it in a forgiving yet workable profile that’s razor sharp at address.

Both irons offer an updated Tour V.T. Sole that glides smoothly through the turf, progressive grooves to improve consistency, and forged construction from a soft 1020 carbon steel body that absorbs vibrations for an extremely soft feel.