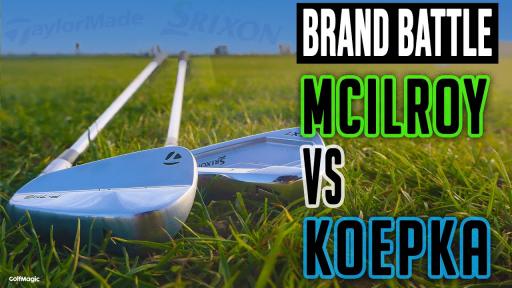 Rory McIlroy and Brooks Koepka are two of the most exciting players the PGA Tour has been blessed with and there is no doubt plenty more to come from both of them in the future. They've both won four majors each and are known for their incredible ball striking capabilities, but which player is using the better irons?

Northern Irishman McIlroy uses the TaylorMade P7MB irons, perhaps the best looking iron ever created by anyone, but they're certainly not easy to hit, well not for us amateurs anyway.

Koepka's choice of irons is slightly more interesting, given that he's not paid by anyone to use their clubs, so he uses the Srizon ZX7 irons purely out of choice and they've already led him to a PGA Tour title in 2021 at the Waste Management Phoenix Open.

Our equipment editor Alex took both of these irons down to the Swing Suite at Croham Hurst Golf Club to put them to the test and see which iron is the superior.

With the new Compact Grain Forging™ process, the company relies on a 2,000-ton forging press to ensure that each P•7MB iron is formed with masterful precision and a tighter grain structure designed to provide the most solid, consistent feel possible.

Created with human intelligence yet perfected by the artificial kind, MainFrame is a one-of-a-kind face design that increases ball speed on every shot.

Milled into the backside of every iron face, MainFrame is a variable thickness pattern made up of grooves, channels, and cavities.

After two years of learning and refining, these final faces offer greatly improved COR because they maximize flex at impact for more ball speed on every strike.

They feature an updated Tour V.T. Sole that glides smoothly through the turf, progressive grooves to improve consistency, and forged construction from a soft 1020 carbon steel body that absorbs vibrations for an extremely soft feel.

Both of these irons are absolutely stunning and are proving to be absolute weapons on the PGA Tour, so make sure you watch the video to see which iron won this brand battle. If you enjoyed the video, help us out by hitting that like button and comment which iron you prefer! Make sure you're subscribed to our YouTube channel so you can keep up to date with all of our content!