Ryan Fox: What's in the bag of the two-time DP World Tour winner?

Srixon's Ryan Fox endured a nervy start to his final round at the Ras Al Khaimah Classic to eventually romp home by five shots in the UAE. 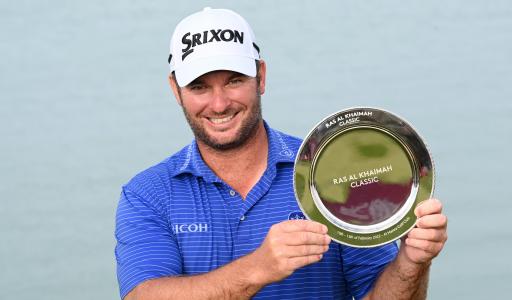 Ryan Fox said he had a feeling in the pit of his stomach during his final round of the Ras Al Khaimah Classic, a feeling only a player with a six-shot lead on the DP World Tour could know.

Fox overcame his nerves and apprehension to win the event at Al Hamra Golf Club by five shots from Ross Fisher, earning his second win on the circuit.

"Relief is probably the main emotion obviously it was a bit of a struggle today. Sleeping on a six-shot lead, I did not sleep well last night and obviously, a couple of guys came at me early," said Fox after his victory.

"I was a bit nervous, I had that awful feeling in the pit of my stomach all day, but I'm very happy with how I played.

"(I hit) a couple of great shots coming down the stretch and it was certainly nice walking up the last with my putter in my hand and knowing I had five or six putts for it."

RELATED: IS THIS THE MOST UNDERRATED GOLF BALL OF 2022? | SRIXON Q-STAR TOUR REVIEW

Despite entering the final round six shots ahead on 19-under-par, the gap was briefly cut to two shots by Pablo Larrazabal who rallied on Sunday.

Fox, 35, made two bogeys in his opening six holes and missed a 15-inch putt from nowhere. This appeared to be the peak of his wobble.

But the New Zealander carded three birdies in his last seven holes to reach 22-under-par and this proved too much for his competitors to catch.

Srixon are extremely proud of Fox winning as one of their prime staff players and he finished the job while using Srixon clubs and Cleveland wedges.

Ryan Fox - What's in the bag of the two-time DP World Tour winner?