Under Armour's new release focuses on comfort and performance with HOVR cushioning technology. 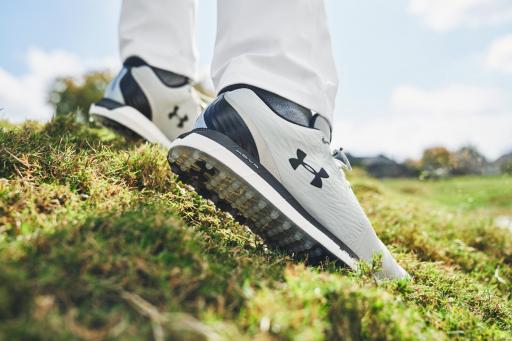 Under Armour has announced the launch of its latest footwear range, headlined by the new HOVR Drive shoe.

The new footwear utilises HOVR cushioning which overcomes the limitations of standard EVA cushioning, while the new system combines energy return and comfort, offering greater benefits to the golfer.

This new release is the product of Under Armour's collaboration with leading bio-mechanist Jean-Jacques Rivet, who has contributed to the company's commitment to data driven design.

Under Armour have developed their traction innovation from Rotational Resistance Traction in 2016 to Horizontal and Vertical Traction systems and this new release utilises this leading-edge technology.

David Stakel, Sr. Director of Compete Footwear at Under Armour, believes the HOVR model provides golfers with the greatest benefits that footwear can offer.

"Under Armour’s HOVR footwear in golf, is for the golfer that seeks every possible performance and comfort advantage on the course.

"Delivering performance throughout our full range has been paramount to the development of the 2021 range. Every shoe for 2021 benefits from Under Armour’s proprietary Rotational Resistance Traction alongside all the bio-mechanical insights we have developed to ensure golf footwear that truly performs."

The HOVR Drive has an SRP of £140 and is one of a number of different shoes in this latest range that utilises the HOVR cushioning system.

The UA HOVR Show SL can be found this year at £130 with a Mod Grey colourway, the popular UA HOVR Fade SL is available in this colour too at £90.

The new UA HOVR Knit provides a sock-like fit at £115 and the new UA HOVR Forge RC SL is £105 and pays tribute to Under Armour's brand heritage with a running shoe-style design.

Under Armour have also released the spiked Charged Draw RST (£90) and spikeless Charged Draw Sport SL (£85) as part of a new performance package this year.