In this video, Alex from GolfMagic puts the Mizuno JPX 921 Hot Metal Pro irons up against the TaylorMade P790 irons. 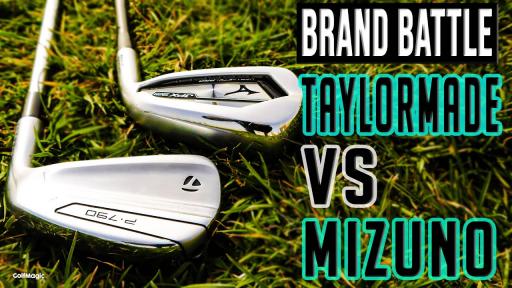 It's brand battle time again and in our latest test, we're putting two beautiful irons up against each other as the crowd favourite TaylorMade P790 takes on the Mizuno JPX 921 Hot Metal Pro irons.

The TaylorMade P790 is the brand's most popular iron ever and due to the club's original success, a new and improved model was launched last year, with a few design and performance tweaks to make it even better.

When it comes to irons, there's not many brands around better than Mizuno and the JPX line probably goes hand-in-hand with the P790 as Mizuno's most popular range, which led to the production of the JPX 921.

These are two of the most versatile irons on the market and certainly two of the best looking, but can one out-perform the other? Find out as Alex puts them up against each other at the Swing Suite.

The all-new 2019 P·790 features a 7% thinner face designed to produce a faster COR and for the first time includes Progressive Inverted Cone Technology (PICT) designed to improved accuracy throughout the set, minimising the right tendency often found in the long irons. The thinner face also maintains sound and feel but enhances feedback regardless of where the ball is struck on the face.

Behind the face of the new P·790 is one of TaylorMade’s most advanced technologies to date: SpeedFoam, a proprietary construction which serves a dual purpose of generating ball speed as well as the management of sound and feel. Injected into the clubhead, SpeedFoam provides the face support and damping properties that make the performance of the P·790 unlike any other iron in the TaylorMade family.

Inside the P·790, a larger mass of tungsten – 15% more than first generation P·790 – has been reshaped to deliver a deeper centre of gravity. This was accomplished through the mass savings in the thinner face as well as by removing mass in the iron frame (high toe area) and repositioning it by way of the larger, low profile tungsten design. The new tungsten design helps to lower the CG and increase the launch angle of the new 2019 model.

The JPX921 features Mizuno’s most complex face geometry to date, to produce additional energy from the clubface; the Hot Metal Pro version offering a more compact profile with reduced offset.

The use of Chromoly 4140M and a re-engineered CORTECH face, now 0.2mm thinner across the centre point, creates exceptional ball speeds. These are further enhanced by the Seamless Cup Face featuring a variable thickness sole design that allows the leading edge to act as a hinge, generating greater flex.

Two stunning and extremely versatile irons that suit a wide range of golfers, so make sure you watch the video to see which iron won this brand battle. If you enjoyed the video, help us out my hitting that like button and comment which iron you prefer! Make sure you're subscribed to our YouTube channel so you can keep up to date with all of our content!