WATCH: What's In The Bag of Dustin Johnson in 2021

In this video, Alex from GolfMagic dives into the bag of TaylorMade superstar and World No.1 Dustin Johnson. 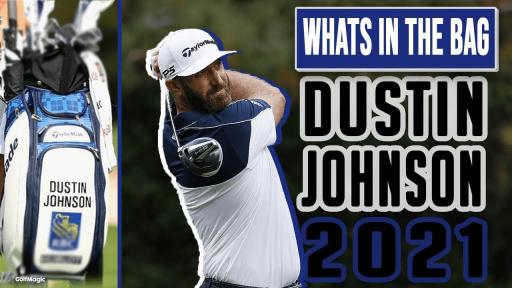 Dustin Johnson has cemented himself as one of the most dominant golfers the PGA Tour has ever seen, and equipped with a full bag of TaylorMade clubs, the 36-year-old has been in unstoppable form as of late. The American recently claimed his first Masters title and going by his current form, it's unlikely to be his last.

In our latest YouTube video review, we take a look at the clubs Johnson is using on the PGA Tour in 2021.

*Johnson switches the 7-wood, hybrids and utility around depending on the tournament.

Johnson had been using the new SIM2 driver, used by his TaylorMade teammate Rory McIlroy and other stars on the PGA Tour, but he switched back to the original SIM driver as he claimed the Saudi International on the European Tour earlier in February.

PERFORMANCE DETAILS: SIM allows the player who craves customisation and adjustability to optimise ball flight characteristics by creating a +/- 20 yards of draw-fade bias through Sliding Weight Technology and a single 10g weight. It features a slightly smaller face than SIM Max and SIM Max•D, appealing to players who place a premium on adjustability and control.

WATCH NEXT: Take a look inside Rory McIlroy's bag for 2021!