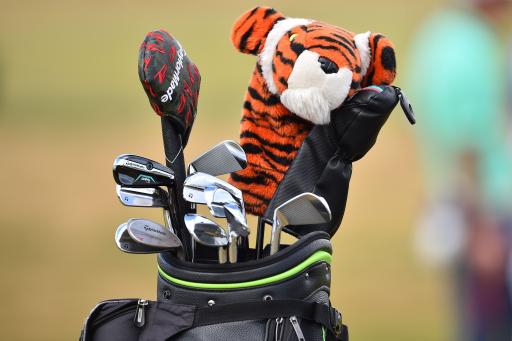 Tiger Woods has thrown the new TaylorMade GAPR 2-iron in the bag at Carnoustie.

Launched on Monday night, the adjustable GAPR trio of clubs boast SpeedFoam, as seen in the popular P790 irons, and come in a low, mid and high option.

Tiger’s “low” option is set at 17 degrees, three degrees stronger than his usual iron at 20 degrees.

“I took a few degrees off of it, just trying to be able to have the ability to chase one down there,” Woods said.

Tiger's been getting his hands on the new @TaylorMadeGolf GAPR gear at the Open #TheOpen pic.twitter.com/f42wKg7qGN

While he’s hitting the same distance - 245 to 250 yards – it’s getting there with a different trajectory, which he believes suits a baked Carnoustie this week.

“If it softens up, it could be a good club,” he said. “If it doesn't soften up, then I might just add a degree to it and keep it a little softer and not have it so hot.”

In the GAPR clubs, TaylorMade designers set out to provide a golf club that offers distance, carry and control combined with consistent yardages and accuracy.

The three products allow golfers to choose a shape and distance required to achieve perfect gapping at the long end of your bag.

Tiger Woods
TaylorMade
gapr
2-iron
Previous
Lowry: Carnoustie is like a runway
Next
Mickelson putts in front of "think you know the Rules" sign at Open