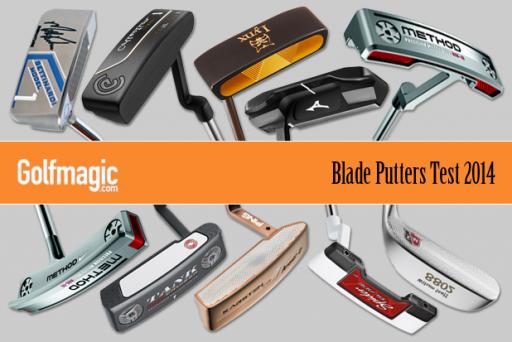 Summary: Spider Blade’s head is counterbalanced with a 130g grip that’s twice as heavy as a typical putter grip. Counterbalancing increases the MOI of the entire club, making it 50% more stable than a traditional putter. TaylorMade Tour staff pros who helped to develop say counterbalancing makes it easier to keep the head moving on your intended path.

Feel: Testers appreciated the PureRoll Surlyn insert and nine testers thought it promoted a soft, yet solid feel and smooth roll off the face. Some thought it felt much too soft and made those 15-putts a little tricky to gauge the correct distance. All testers agreed this counterbalanced putter with a 130g grip was much heavier than a typical grip and therefore aided good stability and a true roll. 7.1 (out of 10)

Performance: Very solid from 6-feet and in but not quite so easy from 15-feet. The majority of our testers commented how the extra length in the grip aided better control and a distinct lack of twisting. While all testers agreed the putter provided tremendous stability and a pure roll, several testers thought it wasn't the easiest to align on target and hence that saw them struggle to get the ball down. Some testers also found it difficult to gauge pace from 15-feet. 7.2 (out of 10)

Verdict: A solid performer for most testers but it divided opinion with several ranking this as their favourite putter and others scoring it further down the pecking order. A decent counterbalanced blade that offers outstanding twist resistance and a lovely stable stroke, but the majority of testers preferred the Tank Cruiser when it came to the counterbalanced offerings. 18.2 (out of 25)