Who is Sam Burns' wife? Find out about the life of the new PGA Tour star

The pair met when they were five years old...and then she wanted nothing to do with him. 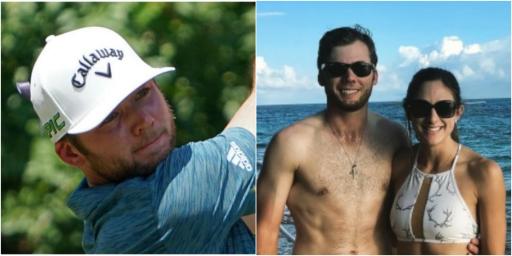 Sam Burns showed us at the back end of last season why he should have caused a serious Ryder Cup headache for Steve Stricker.

But the 25-year-old missed out on a wildcard pick and has so far already showed the world he is the real deal with another PGA Tour victory.

He captured his second PGA Tour title of 2021 with a one-shot victory at the Sanderson Farms Championship in Jackson, Mississippi last week.

Now he's in contention again heading into the weekend at the Shriners Hospitals for Children Open just one stroke off the leader.

But what do we know about Burns? He was born in Shreveport, Louisiana to Todd and Beth Burns and took an interest in golf from a young age.

He played college golf at Louisiana State University, where he won four tournaments in 15 starts during his first season.

Burns represented the United States on the winning 2017 Arnold Palmer Cup team and made his PGA Tour debut in October 2017 at the Sanderson Farms Championship.

Who is Burns' partner? Burns was in the same church class as Caroline Campbell, 25, when they were five years old and attended different high schools.

They started dating eachother at Louisiana State University and got engaged in April 2019 and announced the news with an Instagram post.

"She was actually my first Valentine when we were five years old," Burns told the PGA Tour official website. "And then after that she wanted nothing to do with me until high school."

The pair are said to have dated for approximately five years before Burns asked Caroline's father permission to propose.

He popped the question during the 2019 RBC Heritage where she said yes and Burns told the media: "I hope that we'll have many years together and grow old together and get to enjoy a lot of fun things together."

Caroline Campbell has two brothers and they all attended C.E. Byrd High School in Louisiana. She was into sport and is said to have enjoyed track and field. She was born on 8 April 1996.

"I always kinda knew she was the one," Burns told the WJCL news channel.

NEXT PAGE: WHAT IS THE LATEST TIGER WOODS UPDATE?