Matthias Schwab leads after the first round, but shot of the day went to Andy Sullivan at the iconic par-4 10th hole. 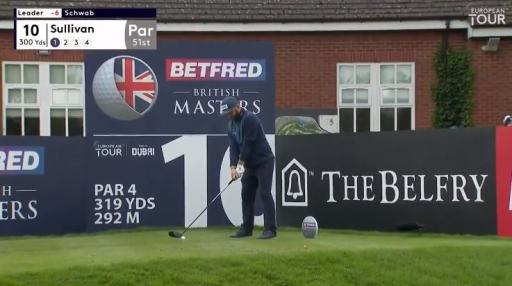 It was a fantastic day of golf during the opening round of the Betfred British Masters at The Belfry and Andy Sullivan hit one of the best shots of the day at the par-4 10th hole.

Measuring 300-yards, the famed 10th hole on the Brabazon Course is an attractive one off of the tee, but requires an accurate bit of left-to-right shot shaping and there's the added danger of the water just short of the green.

Many players went for the green from the tee throughout Wednesday's opening round, but not many pulled it off as expertly as Sullivan, with the Englishman hitting a perfect fade that landed softly on the green.

Sullivan missed the eagle opportunity, but it was a simple putt to make his first birdie of the day, having made a par on every hole throughout the front nine, before signing for an opening score of 3-under 69.

Andy Sullivan with the shot of the day on the famous par four 10th hole #BetfredBritishMasters pic.twitter.com/lpTdU0uvSd

Matthias Schwab (tipped by GolfMagic to win this week) shot the lowest round of the day with a 6-under par round of 66 to take the lead after the opening round, with his only bogey of the day coming at the par-3 14th, but the Austrian bounced back in style by closing with three birdies in a row.

Calum Hill, who has been impressing on the European Tour as of late, moved into second place on 5-under par, one clear of a large group at 4-under par that consists of one of the pre-tournament favourites in Bernd Wiesberger and GolfMagic's Tour blogger Guido Migliozzi.

Tournament host Danny Willett is just three shots off of the lead, with the Englishman opening his account with a score of 3-under 69.

Eddie Pepperell, sporting a lockdown hairstyle of sorts this week, holed out for an eagle-two at the par-4 13th en route to a round of 70.

WATCH PEPPERELL'S HOLE OUT FOR EAGLE: