The American had reportedly been planning to go out to dinner with the West Ham players all week. 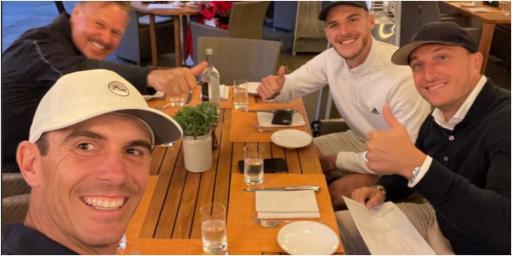 Horschel stiffed his approach shot at 18 and got visibly pumped up, slapping his West Ham tour bag with his wedge before fist-bumping his caddy Mark Fooch to set the clubhouse lead at 19-under par that couldn't be matched.

To the rapturous applause of the crowd, Horschel looks like he shouted the words: "F*** yeah baby!" when he got his ball in tight to the flag.

The American appeared to be texting Noble and Rice all week, setting up dinner plans in the event that he claimed he has watched on television ever since he was 13 years old.

It's not clear who sent the message, but the message on Instagram told "geez" Horschel that if he were to win the coveted event then they would be going out to party in London and he could sleep on the plane home.

Ready to rock the @WestHam bag at @TheOpen this week! ⚒⚒ pic.twitter.com/7cURlCmJXB

We're not sure if things ever got that far, but it looked like they enjoyed a nice dinner together - with Noble and England star Rice beaming with smiles.

Horschel has reportedly been an Irons fan ever since he watched the film Green Street, with Lord of The Rings Elijah Wood playing an American journalist embroiled in the world of football hooliganism and the rivalry between the Hammers and Millwall Football Club.

NEXT PAGE: WHY IT'S A DISGRACE ROSE LEFT OUT OF RYDER CUP