Christiaan Bezuidenhout: From near DEATH to the European Tour

Christiaan Bezuidenhout was once one of the greatest golfers you never knew, now he is emerging as a star. 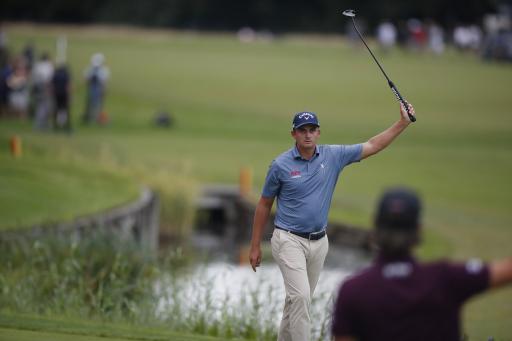 Until his breakout victory on the European Tour in 2019 he was described in inner circles as the best golfer you have never heard of.

His name is Christiaan Bezuidenhout and he looks set to emerge as a star of the game for years to come on the world stage.

He tied for the clubhouse lead after 18 holes at the BMW PGA Championship at Wentworth Club with a sublime first round 64.

That included a slam dunk chip-in for eagle at the par-5 4th hole in truly mesmerising fashion.

His story makes you take stock and realise what is important in your life.

Bezuidenhout doesn't remember how it happened, but he was two years old when he reached for a bottle of pop.

He opened it, took a sip and thereafter was rushed to hospital.

The drink contained rat poison and the doctors had to pump his stomach, but in the process, it damaged his nervous system.

It has left him with speech issues and golf, he has said, has become a safe space.

In a blog post, he said: "The hospital had to pump my whole stomach to get rid of all the poison, but the poison affected the whole nervous system in my body.''

He told ESPN: "Golf was like my safe place, I could be myself. I could have the course all to myself, just do my thing. Fortunately, I had a love for the game from an early age. And for a long time, I wanted to be a professional golfer."

His career has not been without struggles.

In his teenage years, he was taking beta-blockers to help calm him and improve his confidence.

In 2014 at the British Amateur at Royal Portrush, he tested positive for a banned substance - the beta-blockers.

He declared them in a form and did not realise they were banned.

People thought he was taking them to improve his golf, he said.

He said there was a lot of negativity around him and he wanted to prove to the world he could play golf.

And he can, really, really well.

Tying the lead in style

In 2019, he won his first European Tour title at the Andalucia Masters in Spain in June - winning by six strokes.

He was off to a solid start in 2020 before the pandemic hit, losing in a playoff to Lucas Herbert in the Omega Dubai Desert Classic.

It lifted him to the top 50 in the world rankings and thus made him eligible to play on the PGA Tour.

He tied for 38th at the Masters.

Now he is in search of another win on the European Tour.

It's been a long road to get this far, but there is no doubt Bezuidenhout knows he can fulfil his ambitions.

A future major winner? Why not.

NEXT PAGE: OBTAIN YOUR HANDICAP WITHOUT BEING A CLUB MEMBER