Burmester lands his second career victory on the European Tour 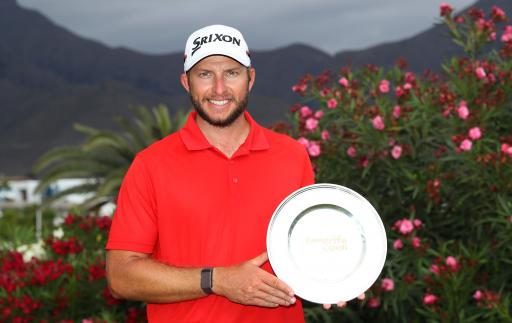 Dean Burmester earned his second European Tour title at the Tenerife Open, sealing a five-stroke victory with a stunning final round display.

The South African began the day one shot back at Golf Costa Adeje, leading a crowded chasing pack as 18 players sat within five strokes of the summit.

Playing alongside the two third round leaders Kalle Samooja and Nicolai von Dellingshausen, the 31-year-old laid down the gauntlet early on with a pair of opening birdies which contributed to a five under front nine of 30 for a one-shot lead as the final group reached the turn.

The seven-time Sunshine Tour winner never let up all day and an 8-under par round of 63 took him to 25 under par, sealing a first ever victory outside of the African continent and moving him to 18th in the Race to Dubai Rankings in Partnership with Rolex in the process.

Von Dellingshausen of Germany holed a nerveless eagle putt at the final hole to claim the best finish of his European Tour career, outright runner-up on 20 under par, while Samooja and Poland's Adrian Meronk shared third place on 19 under.

"There are no words that can describe it, it’s four years of struggle and hard work. Jason my caddie and I have been together two years – he had never won so it’s his first win and he deserves it because he’s been with me through thick and thin," said Burmester, who won his first European Tour title at the 2017 Tshwane Open.

"It’s unbelievable, I can’t even describe it.

"That par putt and nine was a moment where I figured, I believe now, because I struck the putt and it rolled straight over the spot I was targeting and I couldn’t believe I had hit such a perfect putt, and it went in.

"Then a crucial par save on ten, a nice birdie at 11 and then at 12 – that's a shot which I’ve been practicing, hitting over trees and around gardens, when I was young so when I hit that shot pin high I was just thinking, ‘OK, come on, just keep going’ and to go bogey-free is world class.