Marcus Armitage, one of the most outgoing and popular players on the European Tour, has won his first event at the Porsche European Open. 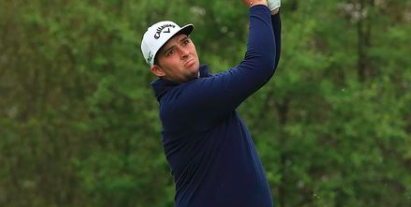 Marcus Armitage has won his first-ever European Tour event at the Porsche European Open, firing a round of 7-under-par on Monday in Hamburg.

Armitage had made 71 starts on the European Tour before his maiden victory at the Green Eagle Golf Courses, which came after a superb display in his final round.

It was an emotional victory for the 33-year-old who has had to overcome heartache and adversity in his career to finish two shots ahead of four players in second place.

"It hasn't really sunk in yet, it's a new feeling I suppose. When I had a practice round the other day I've never lost so many balls in my life! To be stood here being the Porsche European Open champion is pretty cool.

"I'm an emotional guy and I'm struggling to keep a lid on it here. You have to try and breathe and be calm and don't touch your phone because I'll be going berserk. If you start thinking about everybody at home and my fiancée, that's when the emotion comes up and she puts a lid on it.

"20 years ago I lost my mum and I've dreamt about this since that day, being a winner. You have times when you think this might not happen, I just stuck at it and today is a great day and I'm sure she'd be proud."

Marcus, she will be proud

An emotional @marcusarmitage1 after claiming his first European Tour win at the Porsche European Open.#PEO2021 pic.twitter.com/mV7QF2ECsK

The man from Salford began the day four shots behind Matthew Southgate and Maverick Antcliff on 1-under-par, but he soon cut the deficit with three birdies on the front nine and an incredible eagle on the par-4 7th hole.

Armitage birdied the 11th and 12th holes to move two shots ahead in Hamburg and he would go on to post a clubhouse lead of 8-under-par.

Southgate was 6-under-par at the turn on Monday and he found birdies on the par-4 12th hole and the par-5 15th hole to move within one of the leader, needing one more birdie with three holes remaining.

However, the Englishman found the water with his tee shot on the 18th hole and settled for a tie for second place on 6-under-par, along with Thomas Detry, Eduardo Molinari and Darius Van Driel.