It is fair to say that Eddie Pepperell is struggling to find his best form on the European Tour, but the entertaining Englishman is not one to be down in the dumps. 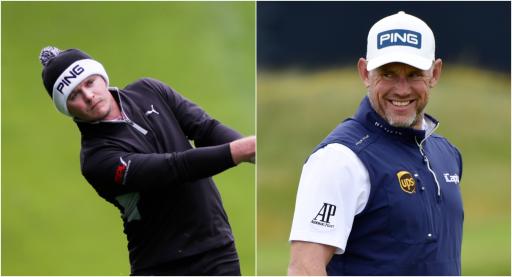 Eddie Pepperell is one of the most popular players on the European Tour and it is always great to read his entertaining social media feeds.

He has never been one to shy away from debate or comment on the many social media platforms available nowadays, such as his previous interactions with Bryson DeChambeau.

The Englishman has recently struggled to replicate the form that put him on the cusp of qualifying for the European Ryder Cup team in 2018.

Since the Omega Dubai Desert Classic at the end of January, Pepperell has only made three finishes in the top-20 on the European Tour.

RELATED: THE BEST GOLF HOODIES FROM AMERICAN GOLF TO HELP THIS AUTUMN

Nonetheless, we know that the World No. 345 is far better than his current play suggests and he is not a character to get down about the problems in his game.

This morning, fellow Englishman and European Tour stalwart Lee Westwood posted a video of himself on Twitter practising at Close House Golf Club in the North East of England.

He asked his followers: "What is your natural shot shape?" In true Pepperell style, he gave an answer that only he could have the nerve to give.

RELATED: GREENKEEPER GIVEN £13,000 PAY-OUT AFTER CULTURE OF "BULLYING" CLAIMS UPHELD

The 30-year-old has posted so many funny tweets over the years and this is yet another one. You'd also like to think that Pepperell is very much aware of his natural shot shape.

He last won on the European Tour at the British Masters in 2018, which followed up his first win at the Commerical Bank Qatar Masters from eight months earlier.

Pepperell is in the field for the Mallorca Golf Open this week and many of us would love to see him celebrate his third victory with a bottle of red wine.