"It was LOUDER than a football match!": Jon Thomson speaks about Open experience

Jonathan Thomson had one of the most memorable weeks of his career at the 149th Open Championship at Royal St. George's, playing alongside the world's best players. 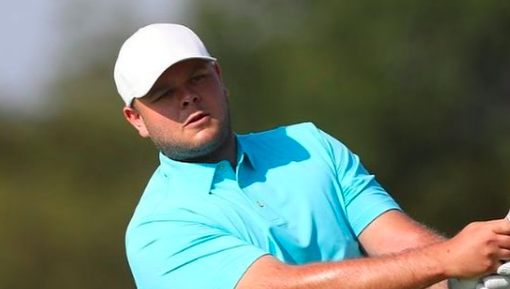 Jonathan Thomson provided golf fans with one of the best moments from The Open Championship at Royal St. George's this year and it is certainly one that he will never forget.

Speaking to the Coffee Friend blog, 'Jigger' described his week in Sandwich and the lead up to the first round, including his famous hole-in-one and staying with fellow Englishman Ian Poulter during the week.

The par-3 16th hole at Royal St. George's can be treacherous with numerous bunkers protecting the green and it is quite often that you can't see the bottom of the flagstick.

But this was no issue for the 6-foot 9-inch golfer who sent his tee shot sailing towards the hole. His ball bounced on the fringe and spun perfectly towards the cup before it dropped.

Tyrrell Hatton after bad break: "Back off it! F***ing God! F*** you!"
Rory McIlroy: "I've never been so glad to get off the golf course"

"It was a blind shot so I had to rely on the reaction of the crowd - that roar of the crowd when I sunk the hole-in-one will stay with me forever, it came to me in three stages of noise," said Thomson.

"It was louder than a football match. I felt I had charmed the people of Kent with my hole in one - hopefully, I've got a fair amount of new fans now! It was the most intense week of my life.

"Even playing and holding my own with Lee Westwood and Harris English lifted my confidence and it was special to get their words of advice."

Thomson, who finished in a tie for 53rd at The Open, often plies his trade on the Challenge Tour, but before he became a professional golfer, he endured an extremely difficult time as a child.

Jigger, given the nickname when he used to dance in nappies as a young boy, was diagnosed with Leukemia aged seven, but luckily he was still able to work on his golf game.

Thankfully, the man from Rotherham recovered from his illness at the age of 12 and has thrived in his golf career. In 2018, he became the tallest ever player to tee it up on the European Tour.

In the lead up to The Open, Thomson was weighing up where to stay during the week, so he fell upon Ian Poulter who was staying in an RV at Sandwich Technology School, near to The Open venue.

Anyone who follows Poulter on his social media platforms will know that this accommodation looked very good and Thomson was grateful for the chance to stay next to the Ryder Cup star.

"It was the most luxurious experience of my life, it was like a five-star hotel on wheels. We were actually staying on the playing fields at Sandwich Technology School which is round the corner from the course," added Thomson.

"But they did it really well with loads of security and we had a fleet of courtesy cars to get us to the course each day, as we were sadly not allowed in the town due to being in our own little Covid bubble. It was logistically perfect.

"I'd never played the course before, nor had I been to Sandwich either, It's a beautiful part of the world and while I grew up learning my trade on links courses, the course was set up for Open Championship standard which was the hardest layout I've ever played in."

We hope that Jigger can kick on from his experiences at The Open Championship and we hope that his name will be on more major championship start sheets in years to come.

jonathan thomson
jigger
Ian Poulter
The Open
Challenge Tour
Previous
Did you know this rule about STANDING out of bounds with your ball in play?
Next
"I've been proven wrong": Rory McIlroy changes view on golf at Olympic Games