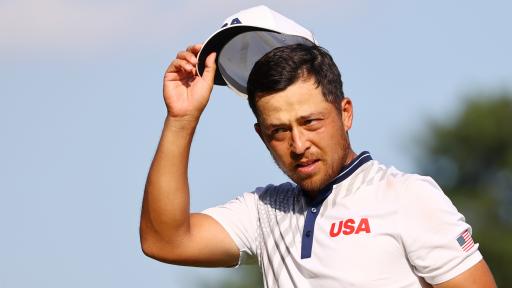 Xander Schauffele shot a 68 to hold a one-shot lead after 54 holes in the Olympic Golf, ahead of a packed leaderboard that includes the home favourite Hideki Matsuyama.

Schauffele led the way by one shot after two rounds in Saitama and he built on this lead by playing his opening 11 holes in 2-under-par.

The World No. 5 added another birdie at the 15th hole to reach 14-under-par and although he made a bogey at the par-3 16th hole, he found another birdie on the final hole to keep his lead over Matsuyama.

Schauffele, who is seven shots ahead of his next best American teammate in Collin Morikawa, has not won on the PGA Tour since the Sentry Tournament of Champions in 2019.

Matsuyama began the third round at Kasumigaseki Country Club just two shots behind the leader and although he bogeyed the 1st hole, he made four birdies in his next seven holes.

One more birdie at the par-4 18th hole completed a score of 67 for the 2021 Masters champion and he has a great chance to win the gold medal, which would be a dream at a home Olympic Games.

Although Rory McIlroy previously said that he has "never dreamed of a gold medal", the Northern Irishman is well in the hunt on 11-under-par, just three shots behind Schauffele.

Much like Matsuyama, McIlroy shot 4-under-par to remain in contention for a podium place and he is set to be part of an exciting final round on Sunday.

Paul Casey also shot a superb round of 5-under-par on Saturday to lift himself to 12-under-par for the tournament, while his teammate Tommy Fleetwood is on 10-under-par and four shots behind Schauffele.