Jon Rahm shot a superb score of 65 on day two of the Scottish Open to share the lead with Thomas Detry and Jack Senior. 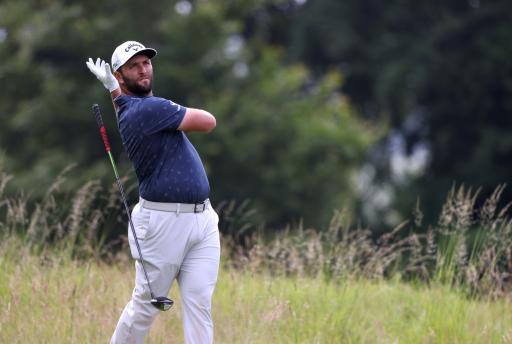 Jon Rahm overcame a period of anger and frustration on the back nine at the Renaissance Club to reach 11-under-par to share the lead at the Scottish Open.

Having shot 5-under-par on Thursday, Rahm burst out of the blocks in his second round with six birdies in his first nine holes, racing into a commanding lead.

Although the Spaniard made another birdie on the 1st hole, which was his 10th hole of the day, he made bogeys at the 2nd and the 4th holes. During this difficult patch, his temper was getting the better of him.

The 2021 US Open champion recovered with another birdie on the 7th hole to reach 11-under-par, setting an early clubhouse lead in North Berwick.

The World No. 1 was the hot favourite entering the week and he has also won four Rolex Series events in his career on the European Tour.

Rahm shares the lead alongside Englishman Jack Senior and Belgian Thomas Detry, who shot respective second-round scores of 67 and 65.

Justin Thomas, who has not made a top-10 finish on the PGA Tour since his win at the Players Championship in March, shot a solid score of 69 on Friday to finish on 8-under-par for the tournament.

Thomas is only three shots behind the leaders with only the weekend to play, but one person who we will not see in the last two rounds is Rory McIlroy.

The four-time major champion shot level-par in his second round to finish on 1-under-par for the tournament, which was one shot shy of the cut mark of 2-under-par.

This is not ideal preparation for McIlroy, who is looking to win his second claret jug at the Open Championship at Royal St. George's next week.

NEXT PAGE: RORY MCILROY RESPONDS AFTER GOLF FAN TAKES CLUB FROM HIS BAG AT SCOTTISH OPEN