After making his second hole-in-one in as many weeks, Joost Luiten had some advice for amateurs still searching for their first ace. 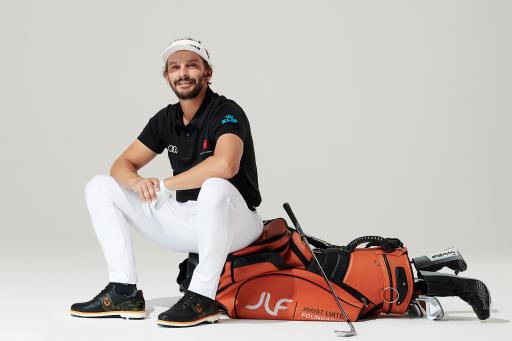 If you're an amateur golfer, the odds of making a hole-in-one are 12,500 to one, but maybe, just maybe, with European Tour Joost Luiten's sound advice, you might make your first ace some time soon.

During the opening round of the Tenerife Open, Luiten made a sensational ace at the 164-yard par-3 2nd hole, making it back-to-back tournament aces for the Dutchman.

It was an incredible way to bounce back from the bogey he made at the first hole and Luiten went on to shoot a 6-under par opening round at Golf Costa Adeje.

WATCH LUITEN'S FIRST ROUND ACE BELOW:

After posting his excellent opening round score, Luiten was asked in an interview what advice he has for anyone still searching for their very first ace.

"Just aim at the pin," Luiten said with a smile. "It doesn't matter where the pin is just aim at it and hopefully -- eventually if you do it many times you will get lucky."

What came out of Luiten's mouth next was a rather unusual phrase, but one that golf fans will remember in their quest for a hole-in-one.

.@joostluiten has made two aces in a week.

He shares some advice for those golfers still trying to make their first hole-in-one. (tag them) #TenerifeOpen pic.twitter.com/0wuooMLc4j

"You know, even a blind squirrel find a nut sometimes and you know that was me today and last week."

The 35-year-old was then asked if we should expect an ace a week and Luiten warned golf fans not to put any money on that outcome.

"I hope so," he added. "I hope it will become a habit but I wouldn't put any money on it, but you know it's always nice hole-in-ones or eagles and albatrosses but you never know what this game will give you.

"Just very happy and very lucky to make two in a week and hopefully we can keep it up."