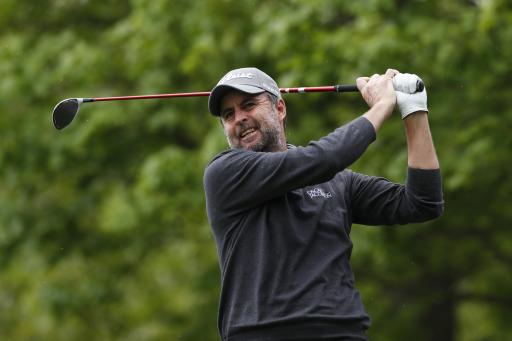 Richard Bland has kicked on from his win at the Betfred British Masters to hold the joint lead at the Made in HimmerLand in Denmark.

Bland, who became the oldest first-time winner on the European Tour at the Belfry two weeks ago, fired an opening-round 66 to hold the lead alongside four other players on 5-under-par.

Starting on the 10th, the 48-year-old Englishman made two more birdies on his outward nine, and then turned for home with birdies on the 5th and 6th holes followed by a superb eagle on the par-5 8th hole to make a great start to his week in Denmark.

Bland experienced an emotional and memorable week at the Betfred British Masters where he won his first European Tour title after nearly 500 starts.

He holds the lead at Himmerland Golf and Spa Resort with four other players, including Lauri Ruuska who also shot a solid 66 in the first round.

Quite incredibly, Ruuska is playing in his first European Tour event and he made a hole-in-one on the par-3 16th hole, which brought great cheers and excitement from his group.

The Finnish player made five birdies and two bogeys in his other 17 holes to tie Bland for the lead, in what was a day to remember for the 27-year-old.

Robert MacIntyre enjoyed a solid start to his week in Denmark, carding a 2-under-par 69 to sit three behind the leaders. The Scotsman, who played in the PGA Championship last week, made five birdies on Thursday but three bogeys pulled his score back.

NEXT PAGE: TIGER WOODS ON CAR CRASH INJURIES: "THIS HAS BEEN AN ENTIRELY DIFFERENT ANIMAL"

Previous
Tiger Woods on car crash injuries: "This has been an entirely different animal"
Next
Jordan Spieth leads at Charles Schwab Challenge but Phil Mickelson struggles