Despite shooting a 66 on day two to share the lead at the Betfred British Masters, Robert MacIntyre took time to pay tribute to his friend. 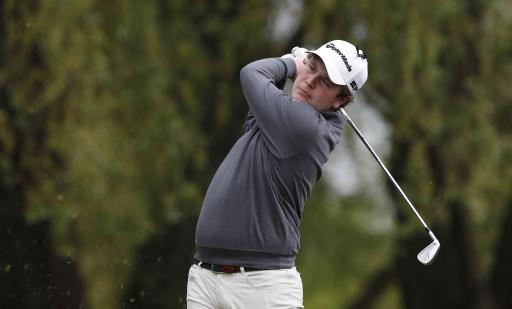 After his second round at the Betfred British Masters, Robert MacIntyre paid tribute to his friend and much-loved Scottish journalist Jock MacVicar, who sadly passed away in April.

MacVicar was taken to Glasgow's Royal Infirmary after he suffered a fall at his home and he died on April 3rd, with journalist Nick Rodger and former R&A press officer Stewart McDougall by his side.

The 83-year-old covered golf for the Daily Express in Scotland for almost 60 years, reporting on his first Open Championship in 1962 when Arnold Palmer was victorious at Royal Troon.

Robert travelled all the way from his residence to Dunaverty to pay tribute to his 'friend'. pic.twitter.com/lTzeE4FxCH

MacVicar's longevity in the sports writing industry was admirable and he was known as "The Doyen", due to his expansive knowledge of the sport.

Golfers such as Paul Lawrie, Colin Montgomerie and Sam Torrence all paid tribute to the legendary writer who will be sorely missed by his family and friends.

MacIntyre, who currently co-leads the Betfred British Masters with fellow Scotsman Callum Hill and Richard Bland, said that he drove back to Dunaverty, Scotland from his residence to pay his respects to MacVicar.

It is the first time that two Scottish golfers have co-led a European Tour event in 10 years after MacIntyre finished alongside Hill and Bland on 7-under-par.

The 24-year-old began his second round with five consecutive birdies before a bogey stopped his hot streak on the par-4 6th hole at the Belfry.

The Scotsman made another bogey on the par-3 12th hole, but he added three more birdies to shoot a 6-under-par 66 and he is in good stead to contend at the weekend.

NEXT PAGE: JORDAN SPIETH EAGLES THE 18TH HOLE TO LEAD AT&T BYRON NELSON ON DAY ONE