Golf fans had plenty to say on social media after a Scottish newspaper made a big mistake with its headline. 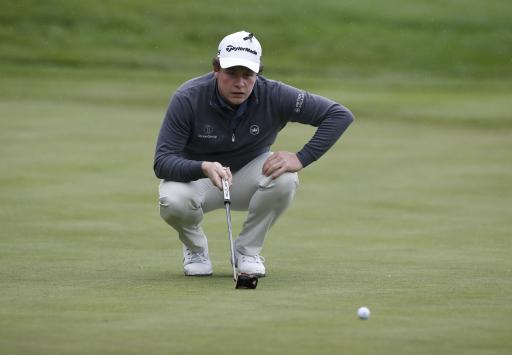 A Scottish newspaper has been slammed on social media for making a pretty amateur mistake, after releasing a headline involving European Tour star Robert MacIntyre.

Scotland star and tournament favourite MacIntyre raced into a share of the lead after he produced a brilliant 6-under par second round on Thursday.

MacIntyre, 24, started his round in sensational fashion, with five birdies in his opening five holes, before his run came to an end with a bogey at the par-4 6th hole.

Another bogey was added to the scorecard at the 12th, but MacIntrye bounced back with a birdie at 14, before closing with two more at the final two holes to sign for a score of 66.

With MacIntyre now in a tie for the lead, Scottish newspaper The Herald put his face on the front page of Friday's sport paper, but made a serious mistake in the headline, which read: "MacIntyre makes his move at British Open".

Now as much as MacIntyre wants to win this week's European Tour event, he would most definitely prefer to "make his move" at The Open (often wrongly referred to as the British Open), which takes place at Royal St George's in July.

Getting the British Masters mixed up with the most prestigious major in golf is a pretty big error and one that the longest running national newspaper in the world should probably not be making.

An image of the paper was put on Twitter by Bryce Ritchie, editor of Scottish golf magazine and website Bunkered, with the post receiving plenty of responses from golf fans who couldn't quite believe such a mistake had been made.

Yikes! I mean, even if it was the Open they'd used the American term on it'd be poor, let alone this!

Championship media centre credentials removed for 5 years. Bringing The Open and all its various names into disrepute.

Betfred British Masters logo right there in the photo for added “who cares”.

Shocking, The Herald has lost the plot

NEXT PAGE: Rory McIlroy's return to "DANGEROUS" form a delight for Padraig Harrington